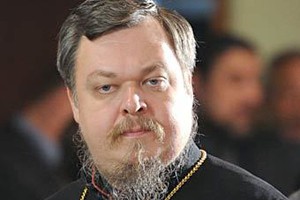 Moscow, November 29, Interfax – The Moscow Patriarchate has called on Orthodox countries, including Russia, not to change in dialogue with the European Union under its influence, but suggest that the EU change instead.

“Russia, Ukraine, Belarus, Moldova, Greece, Serbia, and Bulgaria – representatives of the most powerful civilization – could well demand that the Western members of the Council of Europe begin forming a renewed organization from scratch, changing a lot of what is characteristic of the Western part of Europe and is not characteristic of its eastern part, when entering the Council of Europe, Archpriest Vsevolod Chaplin, the head of the Synodal Department for Church and Society Relations, said in an article published on the Interfax-Religion website.

Likewise, any negotiations with the EU should now begin “with a question as to how the EU is ready to change to be able to become a common house not only for the western, but also for the eastern socio-political tradition on a parity basis, not with docile hearing of someone’s instructions,” he said.

“The western democracy model is now used by a minority of the population of our planet, and it should eventually be realized as an indication that this model is not the only model and that insisting on its universality, especially that all peoples and all legal and political systems should adjust to it is, to put it mildly, unfair and unjust,” Father Vsevolod said.

Any country which have string traditional religions (Orthodox, Islamic, or other) should ask members of this union when attempts ate made to toughly change its legal system or in any negotiations on the accession to a specific interstate union: “Maybe they should change, especially as regards their values and legal and political traditions, before making alliances with countries where powerful religious and moral traditions are present?”,” Father Vsevolod said.

He also cautioned Western elites against forcing their traditions on the majority of the world’s countries, including on the issue of same-sex marriage, recalling that several countries, primarily Greece, are having serious debate of the decision made by the Grand Chamber of the European Court of Human Rights on November 7, which states that the Greek law under which marriage is only possible between heterosexual partners discriminates against same-sex couples.

Most viewed articles
Life Truly Genuine and Authentic in the Eyes of God107
Patriarch Kirill: “We Should Pray for Our Lord to Strengthen Fraternal Feelings of the Peoples of Holy Rus”90
How to Deal with Sin77
The Authenticity of the Vision of Christ in the Life of Saint Silouan60
Holy Cincture of the Theotokos to arrive in France next week58
The Bulgarian Church Can Canonize Its First Patriarch47
“The models par excellence are the great hesychast saints,” says Romanian Orthodox Bishop of Oradea41
Most popular authors
Pravmir.com team137
Fr. Theodore Stylianopoulos107
Archpriest Basil Ross Aden76
Archimandrite Zacharias Zacharou60
Aurelian Iftimiu57
Ștefana Totorcea41