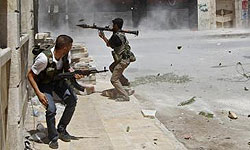 TEHRAN (FNA) – Armed rebels attacked a village in Syria’s Western province of Homs and slaughtered all its Christian inhabitants on Monday.

The armed rebels affiliated to the Free Syrian Army (FSA) raided the Christian-populated al-Duvair village in Reef (outskirts of) Homs near the border with Lebanon today and massacred all its civilian residents, including women and children. The Syrian army, however, intervened and killed tens of terrorists during heavy clashes which are still going on in al-Duvair village.

The armed rebels’ attack and crimes in al-Duvair village came after they sustained heavy defeats in al-Qusseir city which has almost been set free by the Syrian army except for a few districts.

Syria has been experiencing unrest since March 2011 with organized attacks by well-armed gangs against Syrian police forces and border guards being reported across the country.

Hundreds of people, including members of the security forces, have been killed, when some protest rallies turned into armed clashes.

The government blames outlaws, saboteurs, and armed terrorist groups for the deaths, stressing that the unrest is being orchestrated from abroad.

In October 2011, calm was almost restored in the Arab state after President Assad started a reform initiative in the country, but Israel, the US and its Arab allies sought hard to bring the country into chaos through any possible means. Tel Aviv, Washington and some Arab capitals have been staging various plots to topple President Bashar al-Assad, who is well known in the world for his anti-Israeli stances.