Items listed as stolen from the church’s altar room on Dec. 22 include ornate metal crosses and chalices. 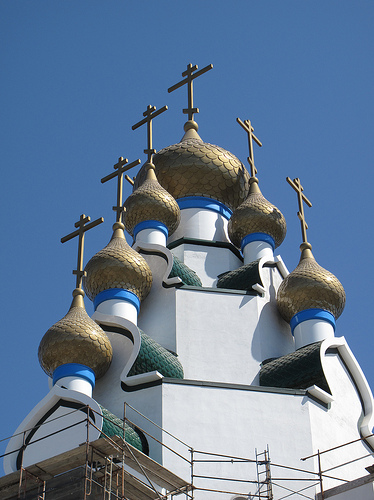 Los Angeles police are asking for the public’s help investigating the reported theft of numerous religious artifacts, including ornate metal crosses and chalices, from the Holy Transfiguration Russian Orthodox Church in Hollywood.

A total of 37 artifacts were reported taken from the church’s altar room in the Dec. 22 burglary, according to a news release issued Friday by detectives in the Los Angeles Police Department’s Hollywood Division.

The church is located at 5432 Fernwood Ave., near the intersection of Fountain and Western avenues.

Photos of the artifacts can be viewed on a Web page posted by the LAPD.

Detectives on Friday issued a statement asking for the public’s help in identifying and locating whoever burglarized the church. The detectives could not be reached for further details.

An LAPD spokeswoman said she was unsure of the estimated value of the missing artifacts.

Police urged anyone with more information to contact the Hollywood Division at (213) 972-2931. During non-business hours or on weekends tipsters can call 1-877-LAPD-24-7.