As I Find You, So Shall I Judge You

If one believes the official reports, the murderer of Father Daniel called out, “Who here is Sysoyev?” In these words lies a challenge not only to Father Daniel, but also to everyone who has decided to devote their life to Orthodox witnessing. It seemed to us that the time of martyrdom and costly witness had long passed, but now we are proven wrong. Today, as always, confessing Christ attracts all the spite and hatred of this world.
| 11 December 2009 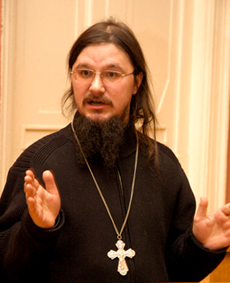 If one believes the official reports, the murderer of Father Daniel called out, “Who here is Sysoyev?” In these words lies a challenge not only to Father Daniel, but also to everyone who has decided to devote their life to Orthodox witnessing. It seemed to us that the time of martyrdom and costly witness had long passed, but now we are proven wrong. Today, as always, confessing Christ attracts all the spite and hatred of this world.

Evil has a simple logic – if the man is gone, the problem is gone. Polemics is for those who have remained human, but when a person resorts to violence, he becomes dehumanized and unable to be what God called him to be.

It so happened that Father Daniel and I would sometimes disagree and argue. Despite these polemics, one thing was important to me – that we believed in the same God and were children of the same Church. Those disagreements were but trifles, which unfortunately are inevitable in everyday life: we were entirely at one when it came to the principles of our faith.

Death is a watershed that separates the important from the unimportant. Death gives the true measurement of a person, making it possible to put misunderstandings aside and see the person the way he or she is. So now Father Daniel is standing before us in all the simplicity of his smile, and how sad it is that we cannot accept a person as they are while they are still alive.

It is beyond doubt that Father Daniel lived in and for Christ. He and only He was the centre and meaning of his life. His daily confession of the faith and his sincere wish to bring people to the Truth was perceived by many as something foolish, not serious, something inappropriate for reputable people.

We talk a lot about the revival of Orthodoxy and, I hope, we work for it to a certain extent. But are there many among us who have no other interests, or rather, meanings in life but Christ and His Church? We can talk about it, but what do our lives say? Our everyday activities? What is the cornerstone of it all?

Almost all who comment on the terrible tragedy agree that Father Daniel was not indifferent – he was sincere and zealous. The Church Tradition has preserved the words of Christ, “As I find you, so shall I judge you.” Father Daniel became a martyr while performing his priestly service. He was trapped, but not taken unawares; he met his death vested in his priest’s stole and cuffs. We constantly pray at every service that the end of our earthly existence be painless, blameless and peaceful. However, we cannot know what, in fact, it will be; we can only pray and try to live a Christian life. That is how Father Daniel lived, just doing his work and relying on God in everything.

Evil thinks in the categories of earthly history, but we were created for eternity. What we will be in eternity depends on what we become on earth. Father Daniel was a priest of Christ and His Church. All his life was filled with this service, and his death is the confirmation of this. “Death is worth living for, and love is worth waiting for ….”

Fr. Daniel’s Autobiography and the Interview with Him on the Occasion of the Opening of the Missionary Centre

On the Murder of Father Daniil Sysoev

Father Daniil Has Gone from us to God as a Confessor