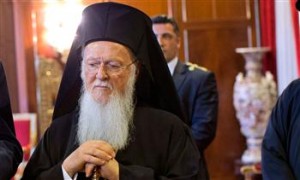 The investigation was launched after a letter was sent from the Central Anatolia province of Kayseri, claiming that the Istanbul-based patriarch would be the target of an assassination attempt on May 29, the 560th anniversary of Istanbul’s conquest by Mehmed the Conqueror.

A man was detained and police forces are searching for two others. The suspects recently arrived in Istanbul from Kayseri, police sources said.

S.A., the detained suspect, refuted the claims and said he was in Istanbul to visit his relatives and he had no intention or plan of murdering Bartholomew.

A file opened by a Kayseri prosecutor has been handed over to the Ankara public prosecutor.

The investigation revealed that another letter was sent to prosecutors in 2008 claiming that S.A. was planning to murder Bartholemew.

Most viewed articles
The Trap of Religiosity108
Bishop Nicholas of Manhattan visits Holy Cross Monastery in West Virginia84
Lord, Save Me!73
Patriarch Daniel explains why the Hesychasts were the most sought-after spiritual fathers and what is a prayerful reason70
Why Everything Is Important (but not the stuff you might imagine)49
Condolences of Patriarch Kirill over the death of believers in the fire that broke out in Abu-Seifein Church in Cairo45
25 Years of Help: the Ship-Church Goes On its 25th Voyage to Distant Villages42
St. Tikhon Church to host Liturgical Music Symposium in October 202238
Ukrainian Church Celebrates Metropolitan Onuphry’s 8th Anniversary of His Enthronement17
Most popular authors
Pravmir.com team225
Vasileios Stoyiannos107
Fr. Theodore Stylianopoulos73
Aurelian Iftimiu67
Archpriest Stephen Freeman49