Assembly of Bishops to Convene September 17-19 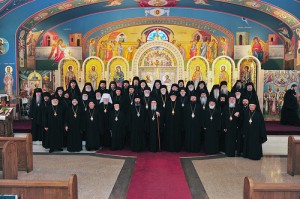 The Assembly of Canonical Orthodox Bishops of North and Central America announced on August 15 that the Assembly will hold its annual meeting September 17-19, 2013 at the Chicago Marriott in Schaumburg, Illinois. This is the fourth Annual Meeting of theAssembly, which is comprised of all 65 active Orthodox hierarchs serving the United States, Canada, and Mexico.

The agenda, available here, includes discussion of the Assembly’s vision, proposals for canonical restructuring, and an Assembly-sponsored national youth conference. The Assembly requests the prayers of all clergy, monastics, and laity.