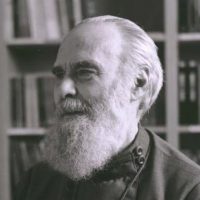 Father Anthony of Sourozh was a Christian who lived according to his conscience and who preached the faith. He is one of the most prominent preachers and theologians of the 20th century, his books are the answer to the doubts and search for a modern man. Andrei Borisovich Bloom was born on June 19, 1914. After the revolution in Russia, his family was in emigration. The boy grew up outside the Church, but once a teenager he heard a conversation about Christianity of a prominent theologian, who however was not good at talking with boys who valued courage and military structure above all. Andrei Borisovich became a doctor. In 1939, before going to the front as a surgeon of the French army, he secretly took monastic vows. During the German occupation, he was a doctor in the anti-fascist underground. After the war he became a priest. Metropolitan Anthony became widely known not only in Great Britain, but throughout the world as a shepherd-preacher. He was constantly invited to preach the Gospel to various audiences, including on the radio and television. Metropolitan Anthony died on August 4, 2003 in London.

Let us therefore go into fasting with this understanding, not measuring our fasting by what we eat and how much, but of the effect it has on us, whether our fasting makes us free or whether we become ...

Day of the Holy Spirit

Today we are keeping the Feast of the Holy Spirit. What do we know about Him? We heard wonderful words of prayer about Him yesterday on Trinity Sunday, but let us think of Him, of the name He is ...

We must not have any misconceptions: it’ll be difficult for us to be companions

Following these weeks of preparation during which we have examined our soul, our lives, all our relationship with God, we enter into the joy of Lent; the JOY (!) of Lent. The word ‘lent’ means ...

Can a Modern Man Believe?

At the end of today's reading, words stand that we pass by very often. The blind man says to Christ, "And who is the Son of God?" and Christ answers, "You have seen Him and He is ...

At the Gate of the Year

<img border="0" hspace="4" align="left" src="https://pravmir.com/wp-content/uploads/pravmir-images/tree.jpg">Year after year I have spoken of the ...

St. John the Baptist is the man who recognizes in Jesus of Nazareth the Lamb of God, God Incarnate, the Man of sorrows. He is the one who in God’s own name declares to those who surround him who He ...

On Feast of Dormition

<img border="0" hspace="4" align="left" src="https://pravmir.com/wp-content/uploads/pravmir-images/metrant.jpg">We are still in the light of the Feast ...

Last week we have entered into the several weeks on our way to the day of the Resurrection, when we are told to examine ourselves; then a time will come to think of nothing but the ways of ...