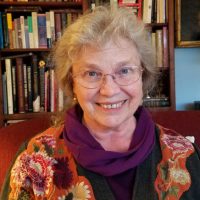 Frederica Mathewes-Green is a wide-ranging author who has published 10 books and 800 essays, in such diverse publications as the Washington Post, Christianity Today, Smithsonian, and the Wall Street Journal. She has been a regular commentator for National Public Radio (NPR), a columnist for the Religion News Service, Beliefnet.com, and Christianity Today, and a podcaster for Ancient Faith Radio. (She was also a consultant for Veggie Tales.) She has published 10 books, and has appeared as a speaker over 600 times, at places like Yale, Harvard, Princeton, Wellesley, Cornell, Calvin, Baylor, and Westmont, and received a Doctor of Letters (honorary) from King University. She has been interviewed over 700 times, on venues like PrimeTime Live, the 700 Club, NPR, PBS, Time, Newsweek, and the New York Times. She lives with her husband, the Rev. Gregory Mathewes-Green, in Johnson City, TN. Their three children are grown and married, and they have fourteen grandchildren.

The High and Holy Calling of Being a Wife

Why CS Lewis is So Irritating! Part 2

Why C. S. Lewis is So Irritating! Part 1

Did you know that CS Lewis died on the same day as John F. Kennedy? And the same day as Aldus Huxley. The Roman Catholic writer Peter Kreeft wrote a really interesting book called “Between Heaven and ...

Why I Abandoned “Choice”

By a monk purifying himself and living a life of repentance and prayer, the whole world is changed. The way to begin change is to change yourself. If you change yourself it really does affect ...