Frederica urges us to focus on the truly important aspects of our Orthodox Faith, rather than getting distracted by politics, scandals or gossip. 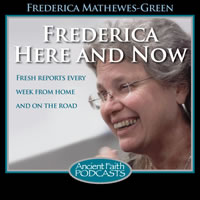 Some time ago, some years ago, I was having dinner with a couple who were raised in the Orthodox Church, and we were talking generally about the way things are going in the Church. There was a controversy going on at the time. I forget which of the jurisdictions it was, but there was something that people were concerned about and some disappointing news about hierarchs and so forth.

They said to me that it had been their observation that some converts get very upset about that. They come into Orthodoxy thinking it’s the perfect church, and when it turns out that their disappointments, in the Church administration or in the ranks of the clergy, that for some converts that’s really shattering to them.

Orthodoxy is a way. It is a path. It is the wisdom of the Church that is gathered into one place and taught and made accessible and given to us so that we can advance in our own journey to theosis. It’s the Sacraments. It’s the Fathers. It’s the whole concept of spiritual direction. It’s the prayers. There are so many things that are Orthodoxy.

What is not Orthodoxy is whoever happens to be the human being, that’s in charge at the moment. And it really doesn’t matter. You always hope that the people in charge were well-chosen and were chosen by God and our holy people. And you hope that once they are in a position where there is some power that that won’t prove to be their downfall, and they will continue to fight and struggle against the passions and grow in holiness themselves. That’s what you hope.

But even if it isn’t, even if turns out there are disappointments, it doesn’t matter. It doesn’t matter in the long run. In the parable that Jesus told about the wheat and the tares, an enemy had planted weeds among the wheat to make it very difficult, when it came time for the harvest, to separate the wheat from the weeds which look so similar. Jesus said, “An enemy has done this.” And I think when we see weeds mixed in with the wheat of the Church, in the Church as it exists on Earth populated by human beings, we can say an enemy has done this, an enemy who seeks the destruction of souls.

It will certainly target those who are honored in the Church and who have power in the Church. Those will be particularly in the sights of the evil one as he seeks to undermine the Church. But even if people of great rank fall, that doesn’t affect what Orthodoxy is. Orthodoxy is a way of transformation, and it works no matter how badly people happen to be doing at any particular point in history.

We often use the analogy and say that the Church is like a hospital. The Church is not a hotel for saints, but it is a hospital for sinners. I think that is such a great and very accurate metaphor. And we can extend it and say that the hierarchs and the people who hold office and the people who control the checkbook and the power and the decision-making abilities of the Church, they are like a hospital’s administrative board. And a hospital has to have that.

They have to have people who may not have any training in medicine whatsoever, but they’re supposed to be smart people who know how to balance a budget, how to make decisions, who will know when it’s time to order more light bulbs, and will know when it’s time to build a new wing onto the hospital. They should be good at what they’re doing, and you hope that if someone is on the administrative board of a hospital that they have been chosen very carefully and that they will continue to do their job – living up to the expectations that were laid on them at the beginning.

But no matter how screwed up they are, no matter how corrupt a hospital board might be, they still cannot damage medical science. The truths of how healing progresses cannot be hurt in any way by the inadequacy or even the corruption of the people who happen to sit on the administrative board of the hospital.

So just a conversation I was having this past week brought that to mind for me again. Certainly, you hope that our leaders will be as holy as they ought to be; that they will live up to the expectations the time they were chosen and that they will be able to resist that extra effort that the evil one is going to put into trying to cause them to fall. But even when there is a fall, it doesn’t hurt the Church. It doesn’t hurt Orthodoxy in the long run.

Sometimes we just have to live through some up and downs and some uncomfortable or even disappointing times. Nevertheless, it has nothing to do with my journey or your journey spiritually. We are called to mind our own souls and to attend to our own sins. We’re not called to be the keepers of anybody else’s sin. No matter how disappointing earthly Orthodoxy may look, it does nothing to take the shine off what Orthodoxy is in eternity.

And I think, if it’s the case where your neighbor is abusing a child, that’s not being judgmental if you call the cops. There are times where we are supposed to step up, and name what we are seeing and bring about justice. I think that’s only judgmentalism if in your heart there is an attitude of vindictiveness or vengefulness. I think you can make a decision like that without being caught up in it emotionally and getting a kick out of getting someone else in trouble.

Doing justice has a certain serenity and isn’t compounded with our earthly desires to get even or feel like a hero. I think that’s true. And after that, there comes this balancing act where you have to say, “Well how much is it possible for us to do to bring about justice?”

The early Christians lived in a culture where slavery was accepted, and it was impossible for them to make slavery illegal. They had to live the best way they could in that setting and that included gathering funds so they could raise the money to buy a slave and set him free. And in some cases, early Christians would volunteer to become slaves, to take the place of a slave, so that a slave could go free.

And then you have to say, Well even in the Church, we live in a time where it is possible for people to have a voice; where there is the Internet, and you can say something if you urgently believe that this is a truth and people need to be held to an account. You have a possibility of doing this that you wouldn’t have had 100 years ago.

Is that right or wrong? I don’t know. In my case, I just try not to read those websites on any side of any issue, because I know it has nothing to do with my struggle against my passions and against my sins. It’s a waste of time for me to read it. I know people who feel very urgently that they are called to try and bring about justice and to do the right thing. And it’s not up to me to judge their calling.

I can only speak for myself. I feel, as an American who lives in a democracy, I can, with my vote, hopefully one day make a difference in the issue of abortion in America. But as an Orthodox living in America, who does not have any power in terms of the Church or the hierarchy, I feel that it’s not my business to poke my nose into things that it’s not up to me to control or to change or deplore. It’s just not any of my business.

I have plenty to do – trying to remember to pray as I should and trying to remember to read the Scriptures that I should. I have my hands full just taking care of myself. So I just wanted to mention that. I was kind of surprised at that conversation, so many years ago, when they were saying that converts are sometimes disappointed in Orthodoxy when they see that there are flaws – sometimes very disappointing flaws – in the leadership.

That never would have occurred to me. I was like “Really? There are really converts who feel that way? Wow, that’s so strange Why would they?” Because to me it’s so obvious; that is not Orthodoxy. You know what Orthodoxy is. Orthodoxy is what lies within your own power to amend your own life and heal your own soul by the gift of God and the power of the Holy Spirit. As far as I’m concerned, that’s the only thing that I personally need to be concerned with.