Since the court’s decision to extend the detention of you-know-who for another six months, the emotionality of debate has reached ultrasonic excitement. The rage with which bloggers have been pouncing on the Patriarch is above all reminiscent of the famous “Two Minutes Hate” in George Orwell’s 1984:

In its second minute the Hate rose to a frenzy. People were leaping up and down in their places and shouting at the tops of their voices in an effort to drown the maddening bleating voice that came from the screen. The little sandy-haired woman had turned bright pink, and her mouth was opening and shutting like that of a landed fish. Even O’Brien’s heavy face was flushed. He was sitting very straight in his chair, his powerful chest swelling and quivering as though he were standing up to the assault of a wave. The dark-haired girl behind Winston began crying out ‘Swine! Swine! Swine!’ and suddenly she picked up a heavy Newspeak dictionary and flung it at the screen. It struck Goldstein’s nose and bounced off; the voice continued inexorably. In a lucid moment Winston found that he was shouting with the others and kicking his heel violently against the rung of his chair. The horrible thing about the Two Minutes Hate was not that one was obliged to act a part, but, on the contrary, that it was impossible to avoid joining in. Within thirty seconds any pretence was always unnecessary. A hideous ecstasy of fear and vindictiveness, a desire to kill, to torture, to smash faces in with a sledge-hammer, seemed to flow through the whole group of people like an electric current, turning one even against one’s will into a grimacing, screaming lunatic. And yet the rage that one felt was an abstract, undirected emotion which could be switched from one object to another like the flame of a blowlamp. 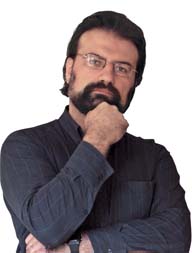 Bloggers’ lofty talk of bringing back the Moskva Pool, throwing priests from bell-towers, and recreating 1917 has formed an atmosphere in which rational discussion is difficult, but one in which it is particularly important.

Let us therefore try to avoid participating in the Two Minutes Hate and instead try to understand what’s really going on.

Why is the Patriarch being condemned for the court’s decision? Suppose you think that this decision is incorrect. Well, I also think that it is incorrect and, so far as I can judge, so does the majority of Orthodox writers. The hooligans should long ago have been given some sort of fine – and an end put to all this.

Where have you gotten the idea that the Patriarch is somehow behind this decision? Do you have telephone wiretaps, opened mail, dispatches from secret agents, or at least some kind of information?

When I tried to ask these bloggers what the basis of their certainty was, they simply made some generic statements about how “the Church has merged with the regime” and how they are “certain of this.”

There are people who believe, with no less certainty, that all power in this country is under the control of a sinister Judeo-Masonic conspiracy. Every judicial decision they don’t like has therefore been dictated by the Elders of Zion.

Does their certainty prove anything at all regarding the true state of affairs? I’m afraid not. But during the Two-Minutes Hate such simple questions don’t get asked.

One can put aside the emotional manipulation and come to regard what is going on here as a political game, the participants of which are pursuing their own interests – as, in fact, is the case.

One can identify four players and a crowd of extras:

1. The punk singers themselves (winning everything they wanted);

2. The authorities (winning a great deal);

3. The protest movement (losing absolutely everything);

4. The Church (losing, although the extent of its losses is not as great as that of the protest movement);

5. The crowd of extras: bloggers, demonstrators, picketers, and the signers of various letters, in support of one side or the other.

The punk singers: They wanted to gain notoriety and they have succeeded: they are being written about in the world news. The price for this is their confinement – which, up to a point, they are perfectly willing to pay. Allow me to be brutally honest: this is a game. They began to play it, they willingly continue to play it, and they could stop playing it if they so desired. But so far they don’t have any need to stop because they are winning: their shares are continuing to grow.

The authorities: Who among bloggers remembers Churov: who was he and what was his claim to fame? No, no: don’t Google him – answer from memory! Bloggers now have a different enemy, against whom they are fighting valiantly. The authorities’ problem with the protest movement has been solved so perfectly that a better solution could hardly have been dreamed up.

The protest movement: What remains of it is a group of zealots who want to bring back the Mosvka Pool. This noble undertaking has completely distracted them from their own protests. Citizens less eager to throw priests off bell-towers and recreate 1917 have quietly gone back to playing World of Warcraft.

The Church: Of course, it’s pointless to take seriously the promise that “all reasonable people will leave the Church.” The “reasonable people” saying this never belonged to the Church, and never had plans of joining. Moreover, they cannot even begin to guess why people actually do belong to the Church. Nonetheless, there really has been no small amount of confusion and distress.

In this mix, two sides are winning: the punk singers (to a certain extent) and the authorities (above all); two are losing: the protest movement (nearly to the point of complete self-destruction) and the Church (to a much lesser extent, but none of this is in its favor).

I have reasons to believe that the extension of the pre-trial detention came as a surprise to the Church’s leadership. I will not disclose some of these reasons, but others are perfectly obvious: we know who has motives to prolong the detention and thereby win a great deal – and it’s not the Church.

I understand that these bloggers imagine that the Russian Orthodox Church is the Universal Evil trying to stifle all that is bright and good – and especially such embodiments of goodness and light as [censored].

Why is this Universal Evil stifling all that is bright and good? Why would it want to do this? Simply because this is how things work in any decent Hollywood movie – and reality is not allowed to differ from Hollywood movies. But if we are to consider rational motives, then we know who has them and who doesn’t.

However, allow me remind you that the Church, from the very beginning, has officially declared that it does not seek imprisonment. “The Russian Orthodox Church does not see grounds for detaining in custody the members of the feminist punk group [censored] who staged an incident in the Cathedral of Christ the Savior,” reported Interfax, citing Vladimir Legoida, head of the Synodal Information Department.

He stated: “Official representatives of the Church have repeatedly stated that they do not support the idea of a term of imprisonment in this case, but call for its public condemnation and acknowledgment of the crime.”

Fr. Vsevolod Chaplin has also stated his opposition to imprisonment. Of course, one can shout: “the Russian Orthodox Church is holding women in prison!” But then you should bear in mind that you are shouting a deliberate untruth.

I encounter with some frequency the assertion that “if the Patriarch wanted to, he could have ordered the removal of the statement of claim.” It would take no more than half a minute to discover that this is legally impossible. I understand that bloggers don’t have this amount of time – but allow me nonetheless to inform you that the proceedings on this matter are exclusively in state hands.

Orwell had a very keen observation in regard to this kind of mass hysteria: “And yet the rage that one felt was an abstract, undirected emotion which could be switched from one object to another like the flame of a blowlamp.”

In this overwrought atmosphere, Orthodox Christians are faced with the temptation of behaving like everyone else: to respond to the stream of insults and threats with their own insults and threats; to reply to talk of throwing priests from bell-towers with talk of harsh punishments against atheists and blasphemers. This is a temptation, first, because we have received this clear commandment: Cease from wrath and forsake anger; fret not thyself so as to do evil (Psalm 36:8).

Second, bear in mind that when we express anger and rage we are joining the crowd of extras and participating in the game, which we aren’t winning by a long shot. Haven’t you noticed the eagerness and unconcealed glee with which anti-Church sources reprint such virulent language? Who, in the end, are we helping?

Then what should we do? To begin with, what not to do: let us not be extras; let us not participate in this game. The best reaction to the Two-Minutes Hate? Non-participation.