Award for President Anastasiades of Cyprus 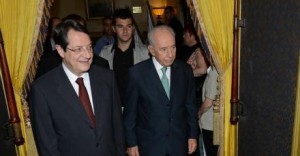 JERUSALEM – The Patriarch of Jerusalem Theophilos III received President Anastasiades during his working visit to Israel.

He invested Anastasiades with the Grand Cross and Star of the Orthodox Knights of the Holy Sepulchre saying that the nomination is “in recognition of your efforts for peace and justice not only in Cyprus but also in the wider Mediterranean region.

The President presented the Patriarch with silver olive branches.

He will also give an address at the University of Tel Aviv.