Back to the Catacombs

Our long kick at the Byzantine can is over, and we now live in a militantly post-Christian culture. Witness the notorious 1989 “work of art” by American Andreas Serrano, showcased at the Vancouver Art Gallery, which consisted of a picture of Christ in a container of urine. Witness the current debate over same-sex marriage – for it doesn’t matter which side “wins” the debate; the very fact that it can be held reveals that a Christian cultural consensus has been lost. Culturally speaking, it is always open season on the Christians, for Christian symbols and beliefs can be openly mocked in a way no others can in North America.
Fr. Lawrence R. Farley | 06 December 2009

Father Alexander Schmemann, in his essay titled “A Meaningful Storm,” described the history of the Church as consisting of a series of layers. The earliest layer – and most fundamental, I would suggest – is that of the early Church, a time of pagan persecution when the Church lived its life “in the catacombs,” so to speak, as a hounded and illegal sect. Then came the second layer, after the Peace of Constantine, when the first Christian Emperor called off the dogs of persecution and gave the Church a privileged place in the sun, beginning the long and glorious Byzantine experiment of Church-State symphonia. After about a millennium, when the Empire suffered increasing reversals and eventual overthrow in 1453 AD, this was followed by the third layer, characterized by the growth of national churches in the various territories of what used to be the Byzantine Empire. It has been called Byzance aprиs Byzance – “Byzantium after Byzantium” – when the doubleheaded eagle of Byzantine Rome made a reprise role among the newly-formed nations in the Balkans.

The Orthodox Church in North America, of course, while inheriting all this layered history, never experienced it directly, being far from the territory of Byzantium. North America did, however, experience wave after wave of immigration, and became a kind of receptacle for a whirlpool of piety and practice from the Old World. And though some would minimize the Christian foundations of America, it can make a credible claim to have been a Christian nation: Abraham Lincoln called its citizens on three separate occasions to “a day of humiliation, prayer and fasting” in times of national crisis; the motto “In God We Trust” is famously inscribed on its currency; and Christian holy days still offer the occasions for its public holidays. Even north of the US border, in the previous generation of the 1950s, pretty much everyone went to “the church or synagogue of their choice.” It wasn’t exactly Byzantium or Holy Russia, but it sure felt Christian (especially, one imagines, to its Jewish population). 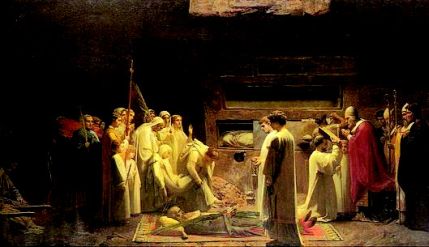 Open season on Christianity? As anyone can see who hasn’t just emerged from a long snooze, things have changed. Our long kick at the Byzantine can is over, and we now live in a militantly post-Christian culture. Witness the notorious 1989 “work of art” by American Andreas Serrano, showcased at the Vancouver Art Gallery, which consisted of a picture of Christ in a container of urine. Witness the current debate over same-sex marriage – for it doesn’t matter which side “wins” the debate; the very fact that it can be held reveals that a Christian cultural consensus has been lost. Culturally speaking, it is always open season on the Christians, for Christian symbols and beliefs can be openly mocked in a way no others can in North America. (If you doubt this, ask yourself what the reaction would have been to a picture of Mohammed in a container of urine, and whether or not an art gallery of any major city would have allowed it to be shown.)

So what does this mean? I would suggest it means that it is time to “return to the catacombs.” Please don’t misunderstand me: this does not mean that we opt out of public debate, or cease to vote, or refuse to run for office. It does not mean that we no longer value the good things in North American culture (including the freedom of speech to debate unpopular things). It does not mean that we eschew patriotism, as if love of country and love of God were somehow incompatible. (Byzantium at least taught us that.) It does not mean that we fill the moat, pull up the drawbridge, and retreat into a frightened and paranoid huddle, fearing any contaminating contact with the world.

What, then, does it mean? “Life in the catacombs” simply means that we acknowledge that to be a confessing Christian involves embracing a life that is now in open conflict with the reigning values of our culture. And, I further suggest, this involves the following.

1. We must at all costs retain the world-affirming sacramental approach of Orthodoxy and refuse to adopt a cultish mindset. In a lecture in Delaware in 1981, Father Schmemann spoke of the need to live “between Utopia and Escape,” avoiding the extremes of imagining we could create Utopia through our own efforts, or of making a retreat from the world, escaping into closed communities dedicated to recreating Byzantium, Holy Russia, or some other mythical version of our past. It is significant that the liturgies of the early Church reflect a worldembracing concern for all, giving thanks for everything and offering it back to God in a spirit of peace and joy. One would never know these liturgies were prayed by people under threat of arrest and death. In “the catacombs” especially, it is important to remember that “the whole earth is full of His glory” [Isaiah 6:3], and to retain the joy of living in God’s world.

2. We must recover a sense that to be baptized means that we have come out of the world, and now belong not to this age, but to the age to come. In the movie “My Big Fat Greek Wedding,” the groom-to-be allows himself to be baptized in the Greek Orthodox Church, and then immediately afterwards says to his intended Greek bride, “Now I’m a Greek!” Voila l’enemie! – our enemy is the attitude which equates being a Christian with being a respectable member of an earthly culture. In fact Christians have always been “a third race” – neither Jew, nor Greek (i.e. Gentile of any kind, be that American, Canadian, or any other people), but the Church of God [see 1 Corinthians 10:32]. We must recover a sense of being different, of being, as Saint Paul says, “blameless and innocent, children of God above reproach in the midst of a crooked and perverse generation, among whom you shine as lights in the world” [Philippians 2:15]. Baptism brings us out of one culture and into another; it is an act of spiritual emigration from this world to the next. All immigrants know they have left one country and entered another. We too must recover this sense of distance from the culture around us.

3. Finally, living as a catacomb people will give us a particular love for others who share that space, even if they are not of our jurisdiction – even if (dare I say it?) they are Christians who are not yet Orthodox. Don’t get me wrong – our ecumenical mandate to heal the schisms remains. Bluntly put, we still need to offer the fullness of the Faith to all who love Christ, and pray for them to become Orthodox Christians. But living as part of an increasingly-marginalized Christian minority means the things we share with non-Orthodox Christians are more important than the things that separate us, and nothing drives that point home like persecution targeting all who confess the Holy Name. It is possible that what the World Council of Churches could not accomplish, increased hostility from outside the churches will.

In conclusion, one might think that a “catacomb” existence would be a cramped one, darkened by fear and hopelessness and depression. I assert the opposite. The catacombs (as the early Church knew) are illumined by the light of Christ, and made spacious by His joy which swells the heart. And when things get really bad, we have been told to straighten up and lift up our heads, because our redemption is drawing near [Luke 21:28]. Life in the catacombs will be just fine, because in the catacombs or out of it, we live as glory-bound children of God.

The Fathers of Nicea: Why Should I Care?

Those for whom ancient history is irrelevant and who equate “old” with “out-dated” (or better yet, “medieval” with…

One should make an examination of conscience every day, before going to bed, confessing one’s sins to God…

What is the proper way to use church rules and liturgical traditions? First of all, by recognizing that…