Orthodox Christianity is a Church at once rooted in the past, yet at the same time a Church looking toward the future. It is this dual nature that permits Orthodoxy to speak boldly about critical contemporary issues, while at the same time firmly retaining its respect for sacred practices of the early Church. It is, in fact, what we like to call a “living tradition.”
Patriarch Bartholomew I, Archbishop of Constantinople, New Rome and Ecumenical Patriarch | 02 April 2014 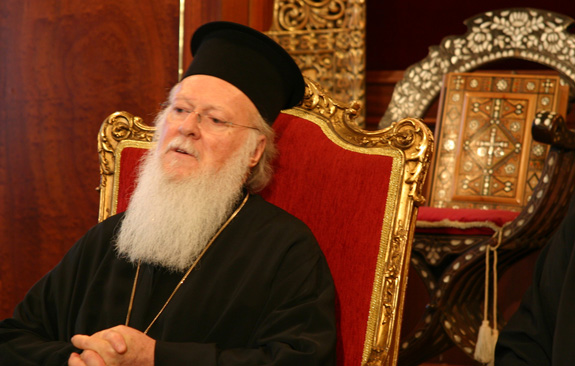 Our Cultural Treasure: Common Values of the Balkans

Good morning – and have a nice and fruirful Confrence!

It is an honor and a privilege to participate in this distinguished gathering of the Balkan Peace Initiative. The subject that we have been assigned to address pertains to the rich cultural heritage that the Balkan people have in common. As a religious leader, what comes to mind – most naturally and most spontaneously – is the unique legacy bequeathed to us from Byzantium, both spiritual and cultural.

Therefore, in its very essence, Orthodox Christianity is a Church at once rooted in the past, yet at the same time a Church looking toward the future. It is this dual nature that permits Orthodoxy to speak boldly about critical contemporary issues, while at the same time firmly retaining its respect for sacred practices of the early Church. It is, in fact, what we like to call a “living tradition.” This vivid sense of continuity with past and community with the future shapes the way that Orthodox people throughout the Balkans think, feel and live.

II. Orthodoxy as a Hidden Treasure

In many ways, while the Orthodox Church has Eastern roots and a formative presence in the West, the legacy of its rich tradition and spirituality remain largely unknown to the world. Nevertheless, it is the Byzantine East that preserved the literary works of classical civilization and Roman law, making them available to the Western Renaissance. Plato and Aristotle would simply not have been known without Arabic translations of the high middle ages. It was the Byzantine East that Christianized the Slavic north and protected the European south from invasions by the Goths and Visigoths. From the forks we use to dine to the hospitals we depend on for healing and to the academic universities where we pursue advanced knowledge, the legacy of Byzantium has proved a lasting and profound influence.

Indeed, following the fifth-century collapse of the western empire, after which the West entered a period known as the “dark ages,” the Eastern part of the empire continued to provide a source of wisdom and prove a center of culture for over a thousand years. Furthermore, the Byzantine currency, the gold solidus or bezant, held its value for seven centuries, making it the most stable currency in history. Even on a social level, the Byzantines were hospitals and rehabilitation centers, dating back to as early as the fifth century; moreover, Byzantine laws forbade the use of torture in legal proceedings. Finally, while the Orthodox Church has had an enormous impact on Eastern Europe and the Mediterranean, it has nevertheless also had a historic and vibrant presence in the West since at least the mid-1700s.

The Orthodox Church remains the spiritual heir of Byzantium, to this day heralding the theological and mystical treasure of that civilization. More than any museum or library can ever preserve, the Orthodox Church is the eloquent expression of the early Church and the living spirit of Byzantium.

III. Common Legacy as the Imperative of Dialogue and Peace

It is precisely this common legacy that mandates the approach of the Ecumenical Patriarchate with regard to inter-Christian and inter-religious dialogue as well as, more generally, with regard to peace.

There are two symbolical images that adorn the entrance to the central offices of the Ecumenical Patriarchate in Istanbul. They silently represent decisive moments in the rich story of a city where Orthodox Christians, Muslims and many other faiths have coexisted over the centuries. One of these images portrays St. Andrew, the “first-called” of the Apostles and patron saint of the Ecumenical Patriarchate. Beside St. Andrew stands St. Stachys, the first priest and successor to Andrew as bishop from 38-54 CE in a long line of bishops in “The City,” variously known through history as Byzantium, Constantinople and Istanbul. Facing this icon of the beginnings of our Church is another image, a magnificent mosaic depicting Gennadios Scholarios (1405-1472), first Ecumenical Patriarch under the Ottoman Empire. The Patriarch stands with hand outstretched, receiving from the Sultan Mehmet II (1432-1481) the “firman” or legal document guaranteeing the continuation and protection of the Orthodox Church and the protection of its traditions throughout the period of Ottoman rule. It is an icon of the beginnings of a long coexistence and interfaith commitment, whose legacy is still felt and lived by Greeks, Turks and others in Turkey but also throughout the Balkans.

The Ecumenical Patriarchate has always been convinced of its wider role and responsibility in the world. This keen sense of obligation before other people and before God has inspired manifold initiatives, such as our tireless efforts to consolidate the unity of the Orthodox Church worldwide, an effort which has often been fraught with national tensions and political divisions. This was the purpose that we convened the recent international assembly of the Heads of all Orthodox Churches, held at the Phanar from March 6-9, 2014,

The same philosophy has inspired our encouragement in principle of ecumenical discussions from the early 20th century, providing the impetus for bilateral discussions with other Christian Churches. Perhaps the most fruitful of these theological dialogues have been engaged with the Roman Catholic Church. One of the highlights of this dialogue was the historic meeting between Ecumenical Patriarch Athenagoras and Pope Paul VI in Jerusalem in 1964, which we shall commemorate this coming May at our meeting with Pope Francis in the Holy Land as an affirmation and commitment to inter-Christian dialogue.

Moreover, even at the cost of defamation for “betraying” the Gospel truth, the vision of the Ecumenical Patriarchate has always embraced the idea and responsibility of serving as a bridge between Christians, Muslims, and Jews. Thus, since 1977, the Ecumenical Patriarchate has organized bilateral inter-religious dialogues with the Jewish community, while since 1986, we have initiated bilateral interfaith dialogues with the Islamic community; indeed, since 1994, we have also organized several multi-faith conversations, in particular hosting a number of international multi-lateral conferences between the Jewish, Christian, and Muslim communities.

The priority in our interfaith dialogues has been to focus on urgent topics, such as social justice in our contemporary world, as well as mutual tolerance and peaceful coexistence in the modern world. At our recent assembly of Orthodox Primates we just mentioned, we expressed our sorrow and support for those suffering throughout the world and especially in the Middle East and Africa as well as Ukraine. Indeed, the final message of the Primates declared: “We appeal to all involved for the immediate cessation of military action, liberation of captives, and establishment of peace in the region through dialogue. . . . Peace for all people also means peace for Christians.”

From the earliest centuries, Orthodox Christians inherited more than simply the fundamental principles of their faith. They also gained an appreciation for the development of artistic and cultural values. Otherwise, how could one ever explain the effort of the gifted architects of the Church of the Holy Wisdom, Anthemius and Isidore, to surpass – within a period of only two centuries – their classical predecessors in ancient Greece in order for Haghia Sophia to supersede the perfection of the Parthenon? This unique historical structure represented theology spelled out in the grammar of magnificent walls and domes, mosaics and frescoes, pillars and light. Every word written in theology, just as every stroke of an iconographer’s paintbrush, every musical note chanted in hymnology, and every stone carved in the most majestic cathedral as well as the simplest chapel, is an attempt to recreate the divine beauty that inspires everyone and everything that breathes.

From an Orthodox Christian perspective, then, the virtues of cultural diversity and religious tolerance provide fundamental skills for life, in the same way that sunlight and water nurture a plant. Without these virtues, there can be no nourishment; there is only spiritual deprivation. Orthodox Christians celebrate the diversity in God’s creation, rejoicing in the infinite multitude of beauty, which can only be truly manifest in diversity. This is how we perceive the importance of culture and the meaning of life. Such diversity is a prerequisite for a unified and peaceful world. When human beings ignore the value of cultural diversity, they diminish the glory of God’s creation.

Regardless of religion, race, ethnicity, color, creed and gender, all human beings are living and unique images of God. In this respect, cultural treasures and cultural values rise above national, political, religious, or racial boundaries. Our spiritual and cultural legacy – indeed, our common values and aspirations – bring us together for interfaith dialogue andbind us together in mutual respect and understanding.

Thank you very much for your attentiveness.