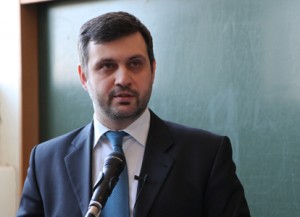 Moscow, June 19, Interfax – The Moscow Patriarchate has called for a ban on the adoption of Russian children by same-sex couples and gay propaganda among minors.

“The decision to protect Russian children from such experiments is a sovereign choice of our state and society, which have a right to make it without dictation from anyone,” Vladimir Legoyda, the head of the Synodal Information Department, was quoted as saying by his press service on Wednesday.

Legoyda believes the comprehensive changes in the Russian legislation aimed at protecting children’s rights “are a result of a vital need.”

“The crisis of family values, which has largely affected our country, requires urgent decisions aimed not only at improving the legislation, but also at changing people’s attitude to family, children, and parental duties,” he said.

In some countries, changes occurred not only in legislations, but also in people’s minds in the past few years, ‘which essentially destroyed family in the sense in which it was a pillar of the European civilization,” Legoyda said.

“The recent recognition by some countries of same-sex unions as equal to families, which envisions the right to adoption, is the final accord of the lengthy process of giving up the concepts of chastity, abstention, and fidelity,” he said.

Societies are conducting “a horrible experiment” on children,” Legoyda said. “Both believers and all sensible people oppose such things because such adoptions may give children mental problems which have not been studied yet,” Legoyda said.