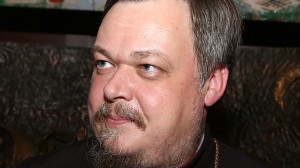 A senior Russian Orthodox cleric has strongly opposed a populist politician’s suggestion to fight terrorism by imposing birth control in the predominantly Muslim regions. The idea has already caused a major scandal.

The head of the Holy Synod’s department for relations between the Church and society, Vsevolod Chaplin, says all peoples must develop freely and have as many children as they consider necessary.

“Russia can have a future only as a community of all peoples that created it and that have formed it over many centuries. This is why the people of the Caucasus who play a serious role in modern Russia’s life and its history, should develop freely, including the freedom to give birth to as many children as they deem necessary. The same applies to the Russian people,” Chaplin said.

The cleric added that the issue of migration, both legal and illegal, was a very acute one, and that the authorities must hear and heed the popular opinion, but noted that “the outrage must not lead to the rooting of fruitless populist radicalism”.

The statement was made a short time after the leader of the populist nationalist LDPR party; Vladimir Zhirinovsky said on a TV talk show that Russian authorities should introduce birth control among the residents of the Northern Caucasus region in order to successfully fight Islamic terrorism. In his trademark fiery style Zhirinovsky said the North Caucasus should be surrounded with barbed wire fences and people inside should be fined for an excessive birth rate.

The 2000-strong LDPR section in the Chechen Republic announced that they were suspending their work; several top level politicians urged a probe to determine if the speech could be considered an instigation of ethnic hatred, and the head of the liberal party Yabloko, Sergey Mitrokhin, suggested  Zhirinovsky be put on trial for Nazism.

The LDPR leader later played down his comments, saying that he was only answering a provocative question and adding he really meant the necessity for parents to think about the future for their children, especially in regions with high unemployment.  Zhirinovsky also said that his freedom of speech was protected by the Constitution and claimed that 90 percent of ethnic Russians share his point of view.