Belarusian Exarchate to mark its 25th anniversary in 2014 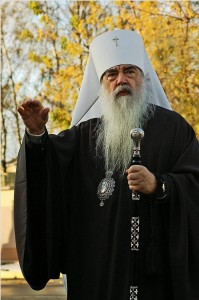 MINSK, 13 November (BelTA) – The Belarusian Exarchate will celebrate its  25th anniversary in 2014 and the 35th anniversary of service of Metropolitan Filaret of Minsk and Slutsk, Patriarchal Exarch of All Belarus at the Minsk stand in December 2013, BelTA learnt from the Belarusian Orthodox Church.

The anniversary of Metropolitan Filaret’s service at the Minsk stand will be celebrated on 12-15 December.

As for the 25th anniversary of the Belarusian Exarchate, Metropolitan Filaret reminded the participants of the meeting of the Synod of the Belarusian Orthodox Church that the Bishops’ Council of the Russian Orthodox Church made a decision in October 1989 on the foundation of the  Belarusian Exarchate of the Moscow Patriarchate. In the same year the Holy Synod made a decision on the foundation of the Mogilev, Pinsk and Polotsk Dioceses.

The Belarusian Orthodox Church will set up a commission to prepare for  the celebrations of its 25th anniversary. Archbishop Guriy of Novogrudok  and Lida, Chancellor of the Belarusian Exarchate, has been appointed chairman of the commission.

The Synod of the Belarusian Orthodox Church also decided on setting up a  commission on monasteries. Bishop Veniamin of Borisov, Vicar of the Minsk Diocese, will head the commission.