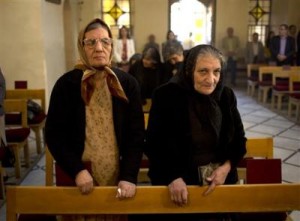 In this photograph made on Sunday, Oct. 27, 2013, women stand during a service in an Armenian Orthodox church in Damascus, Syria. Attacks on Christian districts of the capitals and on Christian villages elsewhere have fueled fears among Syria’s religious minorities about the growing role of Islamic extremists among the armed rebels fighting against President Bashar Assad’s rule. ((AP Photo/Dusan Vranic))

DAMASCUS, Syria—Sami Amir is used to the deep echoing rumble of the Syrian army artillery pounding rebel positions on the outskirts of Damascus. It’s the thump of mortars launched from an Islamist-controlled neighborhood that scares him to death.

The mortars have repeatedly hit in his mainly Christian district of Damascus, al-Qassaa, reportedly killing at least 32 people and injuring dozens of others the past two weeks.

The shelling and recent rebel assaults on predominantly Christian towns have fueled fears among Syria’s religious minorities about the growing role of Islamic extremists and foreign fighters among the rebels fighting against President Bashar Assad’s rule. Christians believe they are being targeted—in part because of the anti-Christian sentiment among extremists and in part as punishment for what is seen as their support for Assad.

Though some Christians oppose Assad’s brutal crackdown on the opposition and the community has tried to stay on the sidelines in the civil war, the rebellion’s increasingly outspoken Islamist rhetoric and the prominent role of Islamic extremist fighters have pushed them toward support of the government.

Christians make up about 10 percent of Syria’s 23 million people.

“When you bring a Christian and make him choose between Assad and the Islamic State in Iraq and the Levant, the answer is clear,” said Hilal Khashan, a political scientist professor at the American University of Beirut, referring to the al-Qaida branch fighting alongside the rebels. “It doesn’t need much thinking.”

The rebels have targeted other Syrian minorities, particularly Alawites, the Shiite offshoot sect to which Assad belongs and which is his main support base.

Altogether, ethnic and religious minorities—also including Kurds and Druze—make up a quarter of Syria’s population. The majority, and most rebels, are Sunni Muslim.

But Christian areas have recently been the focus of fighting.

A week ago, rebels from the al-Qaida-linked group Jabhat al-Nusra attacked the Christian town of Sadad, north of Damascus, seizing control until they were driven out Monday after fierce fighting with government forces. The rebels appear to have targeted the town because of its strategic location near the main highway north of Damascus, rather than because it is Christian.

Still, SANA reported Monday that the rebels in Sadad vandalized the town’s Saint Theodore Church, along with much of Sadad’s infrastructure.

Similarly, thousands fled the ancient Christian-majority town of Maaloula when rebels took control of it last month, holding it for several days until government forces retook it. With rebels in the hills around the town, those who fled are still too afraid to return.

Two bishops were abducted in rebel-held areas in April, and an Italian Jesuit priest, Father Paolo Dall’Oglio, went missing in July after traveling to meet al-Qaida militants in the rebel-held northeastern city of Raqqa. None has been heard from since.

In August, rebel gunmen killed 11 people in a drive-by shooting in central Syria as Christians celebrated a feast day. Activists said at the time that many of those killed were pro-government militiamen manning checkpoints.

Al-Qaida-linked fighters have damaged and desecrated churches in areas they have seized. In Raqqa, militants set fires in two churches and knocked the crosses off them, replacing them with the group’s black Islamic banner. Jihadis also torched an Armenian church in the northern town of Tel Abyad on Sunday, according to the Britain-based Syrian Observatory for Human Rights, an anti-Assad group that tracks the war through a network of activists on the ground.

The apparent deliberate campaign against Christians and other minorities have stoked worries in Washington and many European capitals over providing advanced weaponry to the mainstream opposition Free Syria Army, amid fears the arms will end up in the hands of extremists.

Christians in Damascus are convinced that extremists are deliberately targeting their neighborhoods as rebels battle government forces trying to uproot them from the towns they control outside the capital. Al-Qassaa is close to besieged rebel-held suburbs where Muslim residents have pleaded for international help to save them from starvation and constant government bombardment.

“Recently I noticed that every Sunday, they launch more than 15 mortars a day,” Amir said. “They are targeting specifically Christian areas.”

The most recent shells in al-Qassaa hit Thursday on the doorstep of a fashion clothing shop and next to a wall of a local hospital, killing three young men and damaging a church and several cars, which were left riddled by shrapnel.

Almost all the 50,000 Christians in the mixed city of Homs have fled, and another 200,000 have fled the northern city of Aleppo, both battleground cities. When insurgents occupied the strategic central town of Qusair in 2012, about 7,000 Catholics were forced out and their homes were looted.

Thousands who fled Maaloula have found refuge in the al-Qassaa and other Christian districts of Damascus. Maaloula was a major tourist attraction before the civil war, home to two of the oldest surviving monasteries in Syria. Some of the residents still speak a version of Aramaic, the language of biblical times believed to have been used by Jesus.

“The jihadis shouted: Convert to Islam, or you will be crucified like Jesus,” Youssef said with a shaky voice in his daughter’s al-Qassaa apartment.

He said they were trapped with other Christians for three days in a small house next to the town church, without food or electricity.

“There were snipers shooting everywhere, we were not able to move,” he recalled. “We were so scared. I lost my speech.”

Syrian Church leaders fear that Assad’s fall would lead to an Islamist state that would spell the end to the centuries-old existence of Christians on Syrian soil.

“We are not taking any sides in the conflict,” Bishop Luka, deputy leader of the Syriac Orthodox Church, said at his headquarters in the historic Damascus Old Town.

“We are standing alongside the country, because this country is ours,” he said. “If the country is gone, we have nothing left. Nothing will remain of us. ”