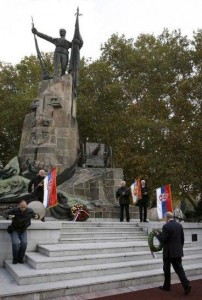 BELGRADE — Belgrade marked the 95th anniversary of its liberation in World War I from occupation by Austria-Hungary by honoring Serbian soldiers.

During the gathering at the Serbian Army Hall, representatives of associations for nurturing the tradition of liberation wars said that they are proud of the Serbian soldiers and the fatherland.

President of the City Committee of the Association of descendants of the soldiers in the liberation wars 1912-1920 Pavle Lučić said that the association will preserve the memory of the Serbian soldiers who fought in World War I.

At the academy, Bishop Jovan of the Serbian Orthodox Church addressed the guests by delivering blessings of Patriarch Irinej, and said that the descendants of the Serbian soldiers in World War I should be honored to belong to the line of those who defended Belgrade 95 years ago.

Prior to the academy, officials laid wreaths and honored the Serbian soldiers at the memorial for the defenders of Belgrade in World War I.

Wreaths were laid by representatives of the City of Belgrade, members of the Society for nurturing the Serbian tradition until 1918 and officials of the Association of descendants of the soldiers in the liberation wars 1912-1920.

On November 1, 1918, the Serbian First Army under the command of Duke Petar Bojović liberated Belgrade, after 500 kilometers of territory crossed in the fight which lasted 45 days during which they made a fierce advance after breaking the Macedonian Front.

From October 1 to November 1, 1918, the Serbian First Army liberated all major cities of the then Kingdom of Serbia and continued toward the north.

Most viewed articles
Metropolitan Hilarion Speaks on Whether It Is Possible for ROC to Reunite with Old-Believers238
Last Man Standing202
The Temple of Woke: Are Universities Basically New ‘Religious’ Training Centers?126
Businessman Buys a 19th Century Church and Returns It to the Faithful86
Turning Trials Into Hope70
Metropolitan Onuphry: People Get Strength for Life and Salvation in the Church62
Russian and Arabian Clergymen Celebrate the Memory of Prophet Elijah in Israel50
Did God Really Order a Genocide?1
Most popular authors
Pravmir.com team434
Archpriest Geoffrey Korz202
Eric Hyde125
Fr. James Guirguis70
Archpriest Lawrence Farley1