Bells as an Orthodox Experience

You’re running late. You are nearing the church or you’re downstairs setting up for the coffee hour. You hear something. It’s the church bell calling you and all the world to worship. The Divine Liturgy is about to begin and if you don’t get a move on – you’re going to be late. 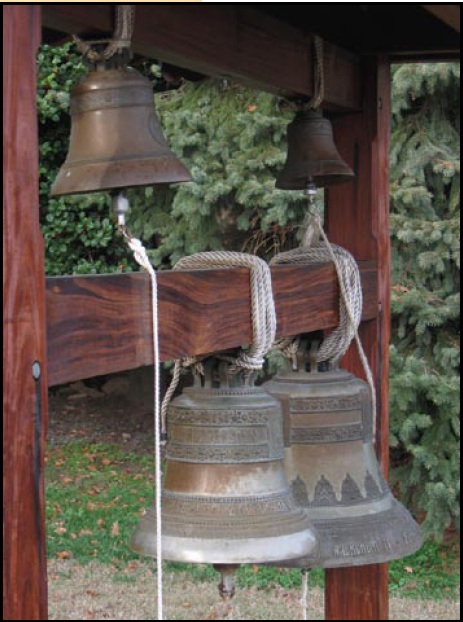 At some other time you hear the bells’ mournful toll and you know someone has gone to God. You cross yourself and pray, Eternal Memory. You hear jubilant bells and you know a marriage has been celebrated and you pray, “O Lord our God crown them with glory and honor”… And when you hear the most joyful and glorious peal of bells you know: Christ is Risen!

Traditional Orthodox church bells, unlike Protestant and Roman Catholic bells, are not tuned on a lathe to produce familiar major and minor chords. The voice of the Orthodox bell is just that – a voice. In the Russian tradition, a church bell, “…must sound rich, deep, sonorous, and clear, for how can the Voice of God be otherwise? It must be loud, because God is omnipotent…” ( “The Bells” by Elif Batuman. The New Yorker, Apr. 27, 2009)

Russian church bells are legendary. In Tolstoy’s War and Peace, it’s the church bells of Moscow’s Kremlin that announced Napoleon’s advance. No wonder that in Tchaikovsky’s, 1812 Overture, the triumphant dramatic conclusion is brought to a fever pitch with the ringing of church bells, superimposed over the music of the troparion, “Spasi Hospodi…O Lord save Thy people…” and the pounding blast of canons. Wow!

Concerning the ringing of church bells, the article in The New Yorker states: “…Their tolling… has been known to bring miserly or hard-hearted people to repentance, and to dissuade would-be murderers and suicides. In Crime and Punishment, Raskolnikov falls into a guilt-induced fever, hearing the ringing of the Sunday church bells; he gives himself away by returning to the scene of the crime…”

The blessing of Orthodox church bells is defined in The Book of Needs as, “The Blessing, Naming and Chrismation of a Bell…” The Blessing of Bells includes some elements of the rite of Baptism including the anointment with holy chrism. The bell is named and consecrated to the memory of a saint whose icon is often molded into its side when the bell is cast. Today not only monastic communities but parish churches as well have seen the addition of traditional Orthodox bells as prescribed in The Book of Needs.

In the service for The Blessing of Bells we pray that God will:

Grant it the grace that all who hear its sound, whether by day or by night, shall be roused to the glorification of His holy name and That by the voice of its ringing all destructive winds, storms, thunder and lightning, and all harmful weather and destructive things of the air may be appeased,calmed and cease to be. That it may drive away every power, craft and slander of invisible enemies from all His own faithful people who shall have heard the voice of its ringing, and arouse them to the observance of His commandments,… May storms, hail, whirlwinds, fearful thunder and lightning, evil and destructive winds befalling them be appeased, calmed and made to cease at its ringing.

Up until the Soviet period Moscow was famous for its thousands of bells whose sounds reverberated across the city and far into the country. The Soviets were quite serious in their destruction of church bells and bell ringing was forbidden by law. Thousands of tons of sanctified and chrismated Orthodox church bells were destroyed and melted into industrial materials including weapons of war, the reverse of turning swords into plough shears. As bells were melted down, churches were turned into factories, storage facilities and all manner of profane structures and thousands upon thousands of faithful were exiled to gulags where they were tortured and martyred for being confessors of the Orthodox Faith.

Several months following the collapse of the Soviet Union I spent a week in Moscow. My most memorable experience followed the Divine Liturgy in the historic Uspenski Sobor (Dormition Cathedral) inside Moscow’s Kremlin. It was Sunday May 24, 1992, the feast of SS. Cyril & Methodius (OS.)

At the conclusion of the Divine Liturgy Patriarch Alexy, of blessed memory, led thousands of faithful including some from America, +Bishop Basil Rodzianko, and Fr. John Meyendorff of blessed memory along with Fr. Daniel Hubiak and myself in procession through the streets of Moscow. Exiting the gigantic doors of this 15th Century cathedral our eyes were drawn upward to the afternoon sky full of hot air balloons carrying huge icons of Christ the Savior and the holy Theotokos. Near Lenin’s tomb we saw a handful of die hard Soviets marching around that infamous mausoleum of the godless. 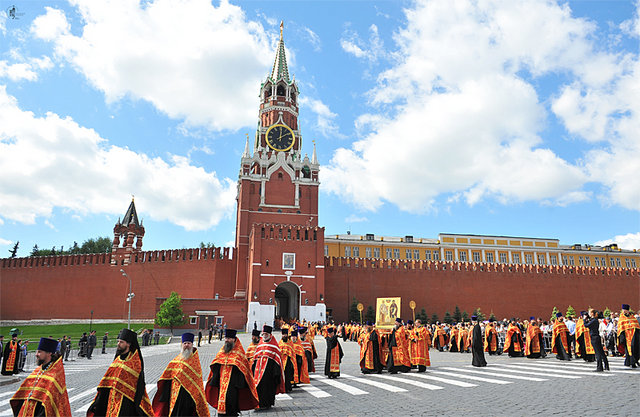 The contrast was amazing: a band of left-over Leninists vs. thousands of Orthodox Christians. Two processions within the same space and yet a million miles apart in belief; one cursing the ringing of church bells while the other blessing God with every peal. Every bell in Moscow was ringing as thousands moved in procession through the streets. It was one of those heaven on earth moments…

It was still the paschal season so the thousands and thousands of us sang over and over again, Christos Voskrese…as we meandered through the streets of Moscow. Our singing of Christ is Risen was superimposed over the reverberation of Moscow’s bells. It combined the soaring high drama of the 1812 Overture and the miracle of Christ’s resurrection comingling with the never ending ringing of those bells, the bells, the bells. Glory to God for all things!