For the first time in 100 years, there will be full liturgical bell-ringing for the Nativity at the Russian dependency in Hebron.

January 3, 2014. PRAVMIR. Hieromonk Alexy (Eliseev), the sacristan of the Russian Ecclesiastical Mission, has consecrated a new set of bells for the bell-tower of the Church of the Holy Forefathers in Hebron. This important event was a good completion to the church’s difficult centennial history, writes Pravoslavie.ru. 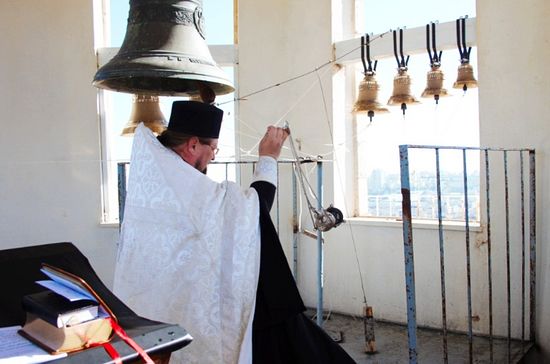 Construction of the church was completed in 1914 and everything was ready for the consecration of the cathedral, but the First World War and subsequent events in Russia led the dependency in Hebron, which had been acquired by Archimandrite Anthony (Kapustin) in 1868 with quarters for the brethren and a tower on the site at which Abraham met the angels, to come under the jurisdiction of the Russian Orthodox Church Outside of Russia in 1952. When the territory with the Oak of Mamre was returned to the Moscow Patriarchate in 1997, there were only four bells in the bell-tower, while the remaining were clappers taken from ships. By this time, the bells had lost their sound. Only one large bell was in use, to announce the time of divine services.

The Russian Ecclesiastical Mission began negotiations in 2013 with organizations in Russia that could help raise funds for the purchase of a full set of bells for the church. The initiative for the collection was taken by the Moscow Charitable Foundation “Zvon kolokolov.” A small belfry, made up of seven bells, was cast in the workshop of Ilya Drozdihina. The names of 500 benefactors were, by ancient Russian tradition, engraved on the outer surface of all seven bells.