Bethlehem—As visitors descended upon Bethlehem this holiday season, they noticed a different look for the Church of the Nativity. Wrapped in scaffolding, the basilica located at the site traditionally regarded as Jesus’ birthplace is undergoing a much-needed facelift after 600 years. 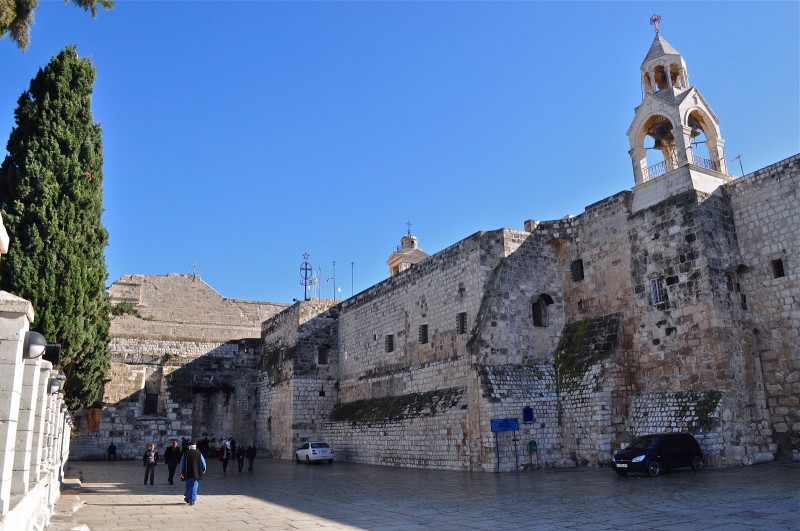 Experts say that water is leaking from the rooftop and threatens to cause serious damage to mosaics and other priceless items.

Project manager Afif Tweme said the first stage of the project began in September and addresses the most pressing issues: the rooftop and windows.

“The water also has a bad effect on the plastering surfaces, on the mosaics, on the floors, on the frescoes. It could damage any, any historical elements inside the church,” said Tweme, who works for the “Community Development Group,” a Palestinian engineering consulting firm.

The companies carrying out the works are obliged to minimize any disruptions to visitors and make sure that pilgrims can “pass freely inside the church and safely,” he added.

The church is one of Christianity’s most visited and sacred shrines. Standing above the grotto where, according to tradition, Jesus was born, the church attracted more than 2 million visitors last year. But the building, with parts dating back more than 1,500 years, has been neglected for decades.

Both the World Monuments Fund, a U.S.-based non-profit group dedicated to protecting historic sites, and the U.N. cultural agency UNESCO have placed the church on their lists of endangered sites. And a hightech survey by a consortium of Italian experts in 2011 called for urgent repairs.

The city of Bethlehem is situated in a part of the West Bank where the Palestinians have self-rule. The Western-backed Palestinian Authority has taken the lead and is financing a great portion of the works, said Ziad al-Bandak, an adviser on Christian affairs to Palestinian President Mahmoud Abbas.

He said the government has provided $1 million, while an additional $800,000 is coming from the private sector. The rest is coming from European countries such as France, Hungary, Russia and Greece, contributing to the roughly $3 million in total needed for the first phase, al-Bandak said.

Beyond the painstaking process of preserving a delicate holy site, the work has been complicated by the sensitive relations among the three Christian denominations that share ownership of the church, the Greek Orthodox, Roman Catholic and Armenian. How those churches use and care for the building is regulated by an agreement, known as the Status Quo, which dates back nearly 200 years.

The first phase, expected to last one year, is being carried out by “Piacenti,” an Italian firm that specializes in the renovation of historical sites. One by one, experts will repair the hundreds of wooden beams in the roof.

Company president Giammarco Piacenti said the rooftop was masterfully restored by Venetian carpenters in 1478. He said the project would be conservative and seek to keep as many original pieces as possible.

Aside from the roof and windows, other elements that will need repair in the future are the external facade, internal plastering, wall mosaics and paintings and wooden works, said Tweme. If funding is secured, the work could take four to five years, he said.

The church was built in the 4th century by Saint Helena and her son, the Emperor Constantine, over a cave where the Virgin Mary is said to have given birth. What pilgrims mostly see today is the basilica church built by the Byzantine Emperor,  Justinian I, who ruled from 527 to 565 AD.

The construction doesn’t include the area that is the main focus of the pilgrimage: the place located under the altar crypt that hosts the 14-pointed silver star marking the spot where, according to Christian tradition, Jesus was born.

Source: The Path to Orthodoxy