Source: Christianity Today
A glimpse at the important work that goes on at excavations every year.
Gordon Govier | 31 December 2014 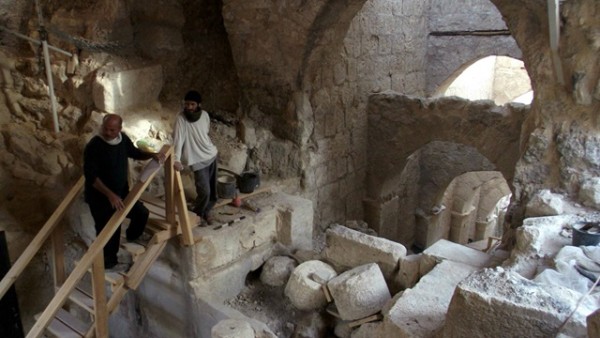 Herodium Expedition at the Hebrew University of Jerusalem

A flurry of year-end announcements provided some late-breaking additions to the list of archaeological discoveries made public in 2014. Below are the top ten findings of the broad variety of institutional and salvage excavations taking place in the lands of the Bible.

The tomb of the first Christian martyr may have been located in an excavation just west of Ramallah. An Orthodox church news service recently reported that a church complex excavation revealed an inscription indicating that the church had been built over the burial site of St. Stephen, who was interred there in 35 AD. However, the lack of news of this discovery from other sources raises questions that bear further investigation.

9. Theater where Polycarp was martyred

Archaeologists in Izmir, Turkey, are currently uncovering the Roman theater of ancient Smyrna, one of the seven cities of Revelation. This theater is also the site where Polycarp, the bishop of Smyrna and a disciple of the Apostle John, was martyred.

8. Tablet that said the ark was round

The world’s potentially oldest clay tablet containing a flood story was found in the British Museum archives and put on display last January. Discovered by the museum’s cuneiform curator, Irving Finkel, the tablet makes note of a round ark and is one of several versions of the flood story that have been found in Mesopotamian excavations. Although this tablet from ancient Babylon, dated around 1750 BC, may be the oldest found containing the flood story, it’s not necessarily the earliest version of the story.

Archaeologists announced in December that organic residue on pottery shards excavated at Ein Zippori, near Nazareth, was olive oil. The vessels were dated around 5800 BC, making them some of the earliest evidence of olive oil production in the region and indicating that it was a diet staple 4,000 years before the time of the biblical patriarchs.

Earlier this month, archaeologists announced that they had uncovered a large farmhouse near the headwaters of the Yarkon River at Rosh Ha`Ayin, east of Tel Aviv. In the early Israelite period, houses were typically small, with a standardized 4-room design. But this house, dating to the Assyrian conquest in the 7th century BC, is 100 feet by 130 feet, with 23 rooms. Numerous wine presses and a large silo for storing grain were also found nearby.

The agricultural production continued at this farm through the Persian and Hellenistic periods; a Greek coin with the images of Zeus and Heracles was recovered in one of the rooms.

The first major temple discovered in Israel in 60 years is being excavated at Tel Burna, near the modern city of Kiryat Gat. It dates back to 1300 BC, approximately the time of the Exodus and Judges. The courtyard of the 2,700-square-foot building yielded remains of sacrificial rituals, perhaps honoring the Canaanite deity Baal.

4. Stone rejected by the builders and Western Wall coins

Over the years archaeologists have been gradually excavating the total length of the Western Wall of the Temple Mount in Jerusalem. At the foundation layer of the southern end of the wall, they recently uncovered a unique stone. While Herodian architecture typically uses stones that have a margin around the edges and a raised-boss center, this one’s surface was smooth and rounded. Archaeologists Roni Reich and Eli Shukron believe it was left over from the building of the Second Temple, the temple of Jesus’ day. This has led some Bible scholars to suggest it was the literal “stone rejected by the builders,” referenced by Jesus in Matthew 21:42, quoting Psalm 118:22-23.

Those two ideas are speculative. But the discovery of coins minted in 17-18 AD under the foundation level has led the archaeologists to conclude that at least part of the Western Wall of the Temple Mount was not built by Herod the Great but by his heirs decades later.

A scarab bearing the name of the Egyptian pharaoh Sheshonq was discovered in 2006 but not announced until earlier this year. Sheshonq I has been identified as the biblical pharaoh Shishak, a contemporary of Solomon and his son Rehoboam. The scarab provides new evidence for Shishak’s raid into Judah as described in II Chronicles 12:2-9.

The scarab was found in the ruins of an ancient copper smelting facility at a site called Khirbat Hamra Ifdan in Jordan, south of the Dead Sea.

Scarabs, coins, seals, and bullae are very small but can have a significant archaeological impact because of the information they reveal. Earlier this year, another Egyptian scarab was found at Khirbet el-Maqatir, from the Hyksos period.

In recent decades, some archaeologists and Bible scholars have argued that David and Solomon were minor or mythological leaders and not the major rulers depicted in the Bible. But the discovery this summer of six clay seal impressions—or bullae—from the 10th century BC indicate significant administrative activity at a remote outpost at Khirbet Summeily near Gaza, on the ancient border between Judah and Philistia. The bullae are the latest in a series of discoveries that support the existence of a major Jerusalem-based kingdom in the 10th century.

The discovery of what was believed to be the tomb of Herod the Great in 2007 ended a 30-year ­­search by the late Israeli archaeologist Ehud Netzer. But this desert palace/fortress still has more secrets to reveal. Earlier this month, Hebrew University archaeologists announced the discovery of a monumental entrance—60 feet long, 20 feet wide, and 60 feet high—providing direct access to the inner courtyard.

Archaeologists say the entryway may never have been used. Instead, Herod ordered the entrance backfilled and the adjacent royal theater covered up, creating the setting for his monumental mausoleum.

Editor’s Note: Two of these findings—the circular ark and Herod’s gate—are also found on the Biblical Archaeology Society’s top 10 list for 2014. CT also covered its list of top 10 finds in 2013 and has reported on the coin that may have crackedthe mystery of Jesus’ birthday (spoiler alert: it’s not December 25), a building that might have been King David’s palace, and other archaeological stories.

Gordon Govier is editor of ARTIFAX magazine and host of The Book & The Spade radio program.