Biggest haul of looted church icons back in Cyprus 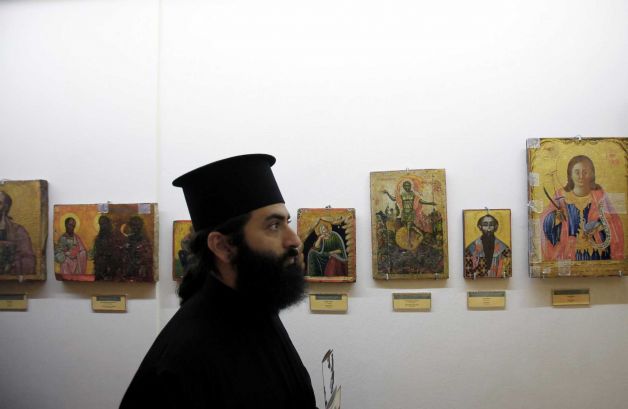 A ceremony marked the return of the 173 items that were stolen from Orthodox and Maronite Christian churches in the Turkish Cypriot northern part Cyprus. The island was ethnically split in 1974 when Turkey invaded after a coup by supporters of union with Greece.

“The Church of Cyprus is joyous that after 40 years, the largest number of stolen treasures is coming back home, to their homeland,” said Archbishop Chrysostomos II, the head of the island’s Orthodox Christian Church. Chrysostomos also thanked retired Pope Benedict XVI for his assistance in the repatriation.

The religious treasures will be put on display and undergo restoration at the Byzantine Museumflanking the Archbishopric in the capital Nicosia. Communications Minister Tasos Mitsopoulos said many items were severely damaged when looters removed them from churches and cut them into more easily transportable pieces.

Chrysostomos said the aim is that all treasures can be returned to places of worship in the north once a hoped-for political solution to the island’s division is reached.

Museum Director Ioannis Eliades said no monetary value can be put on the items including fragments of a 1,500-year-old mosaic depicting a clean-shaven St. Thomas and 1,100 year-old frescoes of unidentified saints.

The frescoes, from the church of Saint Solomone in the village of Komi tou Yialou, are the oldest of their kind in Cyprus which traces its roots in Christianity to the 1st century.

The Apostle Paul is said to have preached the gospel in A.D. 45 and converted the island’s Roman governor Sergius Paulus, the first head of a Roman territory to undergo conversion.

Other important works include the 14th century icons of the Virgin Mary the Merciful from the monastery of Saint John Chrysostom in the village of Koutsoventis and a 16th century icon of Saint Mark from Saint Andronikos Church in Kythrea village.

Police discovered the religious treasures in a 1997 raid on the apartment of Turkish art dealer Aydin Dikmen in Munich, Germany. The treasures remained in the custody of German authorities until a protracted court battle could prove the Cyprus Church’s ownership.

“I’m touched that such a large quantity of religious treasures have been returned,” German Ambassador to Cyprus Gabriela Guellil told The Associated Press.

The church says hundreds of religious artifacts were looted from churches in the island’s north and many have appeared on the black market in Europe, the U.S. and Asia.