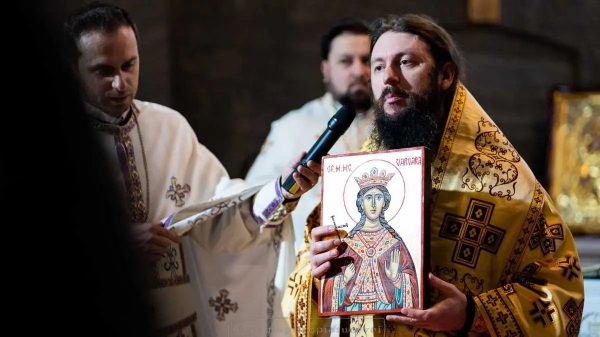 Photography courtesy of the Archdiocese of Suceava and Radauti / Irina Ursachi

His Grace Assistant Bishop Damaschin of Dorna became the first Orthodox hierarch to serve in the chapel inside the Cacica Salt Mine, sculpted by Polish miners 29 meters underground.

The hierarch celebrated the Divine Liturgy together with an assembly of clerics, including Father Răzvan Cîmpulungeanu, missionary priest of Suceava II Deanery, and Archdeacon Bogdan-Mihai Hrișcă, director of the Orthodox Theological Seminary “Metropolitan Dositheus” in Suceava.

In his sermon on December 4, Bishop Damaschin spoke about the fruits of faith and the spiritual benefit of fasting. He urged believers to be more concerned with the soul.

“May the Lord rejoice in us when we meet Him and see that we are not people who are just making empty gestures, but we are people who are filling these gestures, these works of our faith, humility, knowledge of God, our censing, our chanting, our prayers,” the assistant bishop said.

“That is why we ask for the help of the saints, that they may intercede for us and teach us how not to be human only for the outside, but to be humans who work our hearts and give their heart to God today. All the more so for the intercessions of the Holy Great Martyr Barbara and of Saint John of Damascus, whose prayers may the Lord receive before His most high altar,” the hierarch concluded.

The liturgical answers were given by the Byzantion Academic Choir members from Iasi.

His Grace received an icon depicting the Holy Great Martyr Barbara as a token of gratitude.
A memorial service followed for the founders of the Orthodox chapel, located 35 meters below the ground in the salt mine, and for the miners who reposed in the Lord.

The chapel of Saint Barbara, the first operating room in the salt mine, has been arranged since 1803. The pulpit, the altar and the cross are hand-carved in salt.

Every year, on December 4, the priests of the three local denominations offer prayers to Saint Barbara, the protectress of miners, inside the chapel.

His Beatitude Patriarch Daniel on Monday officiated a Te Deum service at the Patriarchal Cathedral in Bucharest, marking…

Most viewed articles
As the End Draws Near – Silence163
How Can We Evangelize Today?145
A Stone Thrown at God and Your Neighbor115
Metropolitan Onuphry: “The Key to the Doors of Paradise is Repentance”86
Hierarchs of Three Local Orthodox Churches Concelebrate in Argentina78
Trial of Politician Defending Traditional Marriage Begins in Finland74
Patriarch Daniel prays for Romania’s national unity, peaceful coexistence and dignified cooperation with other peoples41
Most popular authors
Pravmir.com team238
Archpriest Stephen Freeman163
Frederica Matthewes-Green145
Protopresbyter Themistoklis Mourtzanos115
Aurelian Iftimiu41