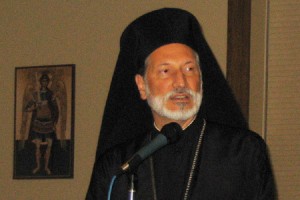 In a letter of 16 August 2013, His Grace Bishop Irinej of Australia and New Zealand extended his heartfelt, sincere prayers and the deepest sympathy of his clergy, monastics and faithful to Their Graces, Coptic Orthodox Bishops Suriel of Melbourne and Affiliated Regions and Daniel of Sydney and Affiliated Regions and to their faithful during this Holy Lent of the Virgin Mary, whose intercessions serve as a true source of consolation for those who now mourn.

Bishop Irinej wrote with utter dismay, relative to the tragic events, resulting in the loss of so many innocent lives and rampant destruction in Egypt on Wednesday, 14 August 2013. “Yet again,” he noted, “frenzied violence prevails throughout Egypt, offered as a thinly veiled political solution in violation of the free will of the Egyptian people.”

“Indigenous, helpless Coptic Orthodox Christians,” he stated, “are targeted because of their faith, their churches, schools and institutions devastated. Instead of ushering in democracy – equally for all Egyptians – terror continues to engulf those who profess Christ.”

As Serbian Orthodox Christians, “fully empathising with our Coptic Orthodox brethren,” the Bishop constituted, “as Kosovo and Metohija, in like manner, continues to bleed at the hands of those who destroy our sacred heritage, intimidate our faithful and would wrench it from the very heart of our nation and people.”

In conclusion, Bishop Irinej offered a prayerful salutation, asking that “the Lord continue to guide us in our μαρτυρία – in witness of the Kingdom of Heaven and keep us steadfast in our preaching of His love and the salvation of His Gospel.”