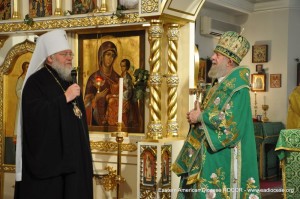 On Thursday, June 28, on the feast day of Blessed Jerome of Stridonium, the namesday of His Grace, Eastern American Diocesan vicar Bishop Jerome of Manhattan, was celebrated at the Synodal Cathedral of the Sign in New York City.

At the Little Entrance, Fr. Mark was awarded the nabedrennik. Upon completion of the Liturgy, Metropolitan Hilarion greeted his vicar, congratulating him on his namesday. On behalf of the faithful children of the Eastern American Diocese, Fr. Serge Lukianov greeted Bishop Jerome, presenting His Grace with a framed cross with a commemorative plaque. A luncheon in honor of the namesday celebrant was held in the Synodal hall, during with the Synodal staff presented Bishop Jerome with a set of white vestments.