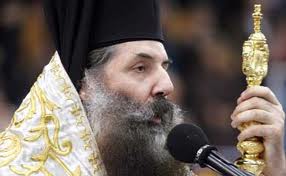 Bishop Seraphim of Piraeus is threatening to excommunicate any member of the Greek Parliament that votes for the amendment to include same-sex couples in the Cohabitation Agreement.

A few days after Greece’s conviction by the Strasbourg Court, which ruled the exclusion of same-sex couples from the Cohabitation Agreement contrary to the European Convention of Human Rights, the government is discussing a new regulation.

In an announcement posted on the Metropolis of Piraeus website, Bishop Seraphim said that the amendment “puts Greece in a position of institutionalizing, in the most gruesome manner, the twist of human ontology and physiology and consolidating the psycho-pathological diversion of homosexuality.”

The Bishop sends an urgent request for an emergency convergence of the Church of Greece hierarchy because: “During these tragic times, we need to address the issue and enforce the necessary measure, like it happened in the Orthodox Church of Moldova.”

In fact, he calls the government not to proceed with the implementation of “this insult against God and men.”