Bishop warns of “toughest times” for Serbs since 2004 pogrom

BELGRADE — A SPC bishop based in Kosovo has said that the position of the Serb people in Kosovo and Metohija (KiM) has not been this difficult ever since March 2004.

Ethnic Albanians at that time organized widespread attacks on Serbs, their property, and holy places.

“Eight full years have passed since the horrible event, and we still see that part of the Albanian community is ready to commit the most serious crimes, including the barbaric desecration of graves,” Serbian Orthodox Church (SPC) Bishop of Raška-Prizren Teodosije was quoted as saying. 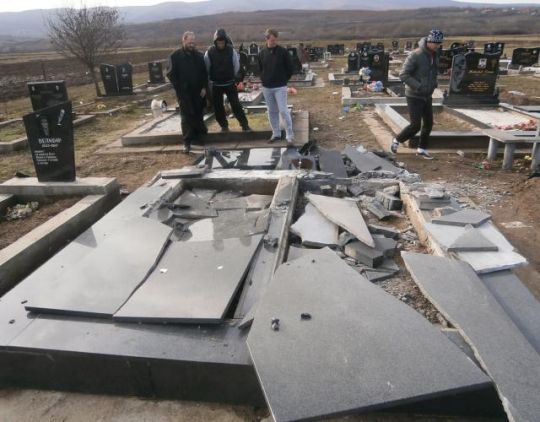 A Serb grave desecrated in Kosovo over the weekend (Tanjug)

Commenting on the latest spate of violence in which several dozen gravestones were either destroyed or damaged in Serb Orthodox cemeteries in Kosovo and Metohija, the Bishop said that “the feelings at seeing images of broken tombs and crosses set on fire are terrible.”

“This is the image of Kosovo and Metohija 14 years after the war and a warning to Europe, which this year is celebrating 1,700 years since the Edict of Milan, which granted freedom to Christianity,” he said.

Teodosije stressed that “after so many centuries, Europe must not allow crosses to burn and Christian shrines and tombs to be destroyed again.”

“These rampages have given pain to the souls of the Serbs’ and all Christians who see these images, but they are bringing far greater civilizational and moral shame on the Kosovo Albanians,” said the bishop.

When the bones of the deceased have no peace in this country, many Serbs are wondering, he said, “what kind of future is awaiting them among people who have no qualms about destroying graves.”

He pointed out that all the international representatives had condemned the violence, particularly Head of the EU Office in Kosovo Samuel Zbogar.

“I can see from the words these people say how appalled they are at seeing the brutal scenes taking place at our cemeteries. KFOR and police increased their presence around our facilities and as far as can be seen, there is a firm stance about the need to prevent further violence against Christians sanctities from happening again,” said Teodosije.

According to Teodosije, the SPC priesthood in Kosovo is safe, “even though the two nuns and two old women in the Monastery of the Most Holy Mother of God in Đakovica spent a sleepless night while bullies were letting out piercing screams only thirty meters away, wishing to enforce the decision of their leaders to destroy this sacred place.”

During the March 17, 2004 ethnic Albanian violence at least eight Serbs were murdered and two went missing. According to currently available data, a total of 4,012 Serbs were expelled from their homes, six towns and nine villages were ethnically cleansed, while 935 homes and 35 Serbian religious sites, including 18 cultural monuments, were burned down or seriously damaged.