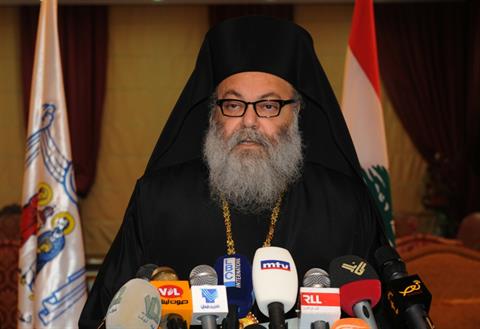 “The nuns are fine, I personally spoke to them over the phone a few days ago at the patriarchate’s headquarters,” Yazigi said before leaving Beirut’s international airport to Russia for a papal visit.

“They are at one of the homes inside Yabroud and they are fine but it is not enough for us to know they are okay: we hope they will be released with the two kidnapped bishops soon because they carry a message of peace in the service of others,” he said.

Thirteen nuns were taken by Syrian rebels from their convent in Maaloula in December. The rebels are believed to have taken the women to the nearby town of Yabroud, where they are reportedly staying in the home of a Christian family.

John Yazigi expressed hope that the bishops were safe and said he would discuss the two cases during his stay in Russia.

A security source told The Daily Star that Maj. Gen. Abbas Ibrahim, the head of Lebanon’s General Security, is still following up on the case of the nuns.

“The General Security chief is maintaining efforts to resolve this file,” the source said.

“However, negotiations are being held discreetly and away from the limelight,” the source said.

Ibrahim has been in contact with Qatari officials as part of efforts to secure the release of the 13 nuns.

His role in the case comes after his successful efforts last year at securing the release of nine Lebanese men who were kidnapped in Syria by a rebel group.

Ibrahim and Qatari officials have also said they are working to secure the release of two kidnapped Syrian bishops.

Meanwhile, the mayor of the northeastern town of Arsal has ended his efforts in helping resolve the case of the kidnapped nuns, an official in the town, which border’s Syria’s Qalamoun, said Saturday.

“The efforts of [Mayor Ali] Hujeiri have ended given that the Qatari officials are now in direct contact with the kidnapers,” the mayor’s deputy, Ahmad Fliti, told The Daily Star.