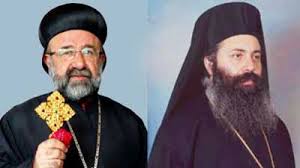 Worries are growing about the fate of the two bishops kidnapped on April 22 near Aleppo, in Syria. More than a month after the kidnapping, there is still no news of the Greek Orthodox bishop of Aleppo, Boulos Yazigi, and Youhanna Ibrahim, the Syriac Orthodox metropolitan of the same city. According to several sources, the two prelates were kidnapped in the village of Kafr Dael as they were trying to mediate on behalf of two priests kidnapped by rebel groups several months earlier.

If, in the days following the abduction indignant responses poured in from around the world, the matter was not covered by the media. A silence that makes the Orthodox fear that the two bishops will be forgotten.

During a sermon given in Damascus on May 20, the Orthodox Patriarch John X of Antioch said, “I will take advantage of this occasion in order to address, in your name, you who are in the homeland or in the diaspora, a call to the international community to encourage them to use all possible means to obtain the liberation of the kidnapped [bishops]…”

In response to that call, the Orthodox community in France decided to mobilize to alert “the international community and French public opinion about the two kidnapped bishops, but also about all people deprived of liberty,” according to the words of the communiqué. At the initiative of the Antiochian Orthodox Archdiocese of Europe and the Syriac Orthodox church in Paris, a gathering is scheduled on Sunday, June 2, at Human Rights Square, Trocadero, Paris.

Interviewed by FRANCE 24, Ignatius Alhochi, bishop of the Orthodox community in France, emphasizes that it is “a silent gathering of prayer for the liberation of the two bishops…” He explains that the goal of this unprecedented demonstration is to “truly attract the attention of pubic powers to this matter, in order to work for their liberation.”

The Bishops are Still Alive

Even if little information filters in about the identity and motives of the bishops’ kidnappers, some sources within the opposition have nevertheless repeatedly reported that the bishops are still alive. “The only information that is sure for us is that two or three days ago a doctor visited the two bishops. They are well,” declared to the press Abdalahad Steipho, a member of the Syrian National Coalition, the main opposition body, on May 26, at an opposition meeting in Turkey.

Abdalahad Steipho, himself Christian, presides over a committee formed by the SNC to investigate the heinous kidnappings of which rebel groups have been accused for two years. He has also stated that the committee’s efforts to make direct telephone contact have failed and that it was receiving “a great deal of contradictory information about the identity of the kidnappers and their demands for ransom.” Asked about different possible paths, the opposition member responded, “This kidnappings are sometimes committed by criminal groups, sometimes by the regime of Asad, and sometimes, we must be frank, units of the Free Syrian Army are responsible for such kidnappings, in order to arrange hostage exchanges.”

For Hassan, a member of the community, who is attending the gathering on Sunday, “the initiative does not intend to be just for the community, but rather for humanity.” “All are invited to come. There will be Christians and Muslims,” he assures. This father, a dentist, does not hide his worry. “We hope that the bishops were kidnapped for profit, as is the case with many Syrians, and not because they are bishops,” he confides.

Several Muslim dignitaries have been killed since the beginning of the Syrian conflict, two years ago, but this is the first time that Christian prelates have been victims of the belligerents. Christians, who constitute about 5% of the Syrian population, are particularly vulnerable in the context of the anarchy encouraged by the conflict that is bloodying the country, the Organization for the Defense of Human Rights emphasizes. Interviewed last September by Reuters, Youhanna Ibrahim, the kidnapped bishop of Aleppo, indicated that Aleppo’s Christians were directly affected “by the fighting that has been going on for months for control of this great city of the north of the country.”

“We want to attract attention to these two persons, but through them to all those who are kidnapped in Syria,” Hassan explains. Kidnapping has, in effect, become commonplace in Syria. Many have had to pay exorbitant sums in order to obtain the freedom of a family member from armed groups.

Cited by Le Figaro last February, the Syrian Minister of Reconciliation evoked “an large  market.” He estimates at 5000 the number of people kidnapped by one side or the other or by bandits who take advantage on instability in order to make money.