Blessed are the peacemakers

Yesterday morning, monks from the Kiev-Caves Lavra Fr. Gabriel, Fr. Melchisedek, and Fr. Ephraim stood on Grushevsky Street in Kiev with a cross and icons, between the demonstrators and the Ukrainian “Berkut” special police force, and stopped the conflict. They entered the arena as peace-makers, and not in support of one side or the other. 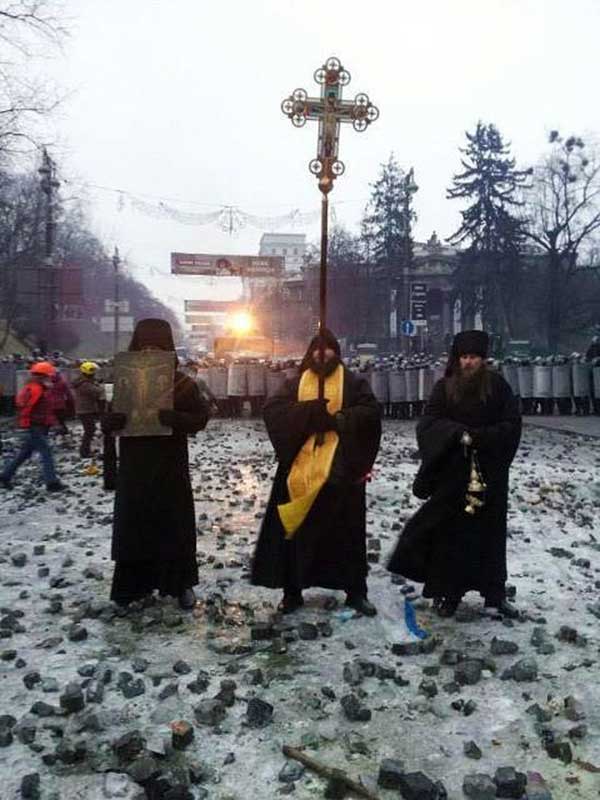 Although they were invited to join the “people”, the fathers only prayed and sang the Paschal troparion: “Christ is risen from the dead, trampling down death by death, and upon those in the tombs bestowing life,” wrote the Ramensky deanery of Moscow on its facebook page. The conflict ceased.

As the website Pravoslavie v Ukraine (“Orthodoxy in the Ukraine”) learned, at around 9:00 a.m., clergy of the Ukrainian Orthodox Church came to Grushevsky Street, placed themselves between the warring sides, and began to pray, calling both sides to stop their fighting and repent.

The monks have no intention of leaving until the situation has completely stabilized.

The clergymen are currently continuing their prayer on Grushevsky Street in shifts. Archimandrite Alipy (Svetlichny) wrote in his facebook page at 19:30 yesterday concerning the events:

“I just came home to change my clothes and warm myself. I am writing quickly. That is because at midnight I must return to the Maidan, which has turned all of its aggression to Grushevsky Street. From 14:00 I stood with the brothers of Desyatina Monastery at their prayer post. After 18:00 Fr. Victor, secretary of the diocese, and Fr. Giorgy, press secretary, arrived. They took my place. I am grateful to them for that, because my neck muscles stiffened.

You can’t even imagine how important it is for the clergy to stand there!

So many people came up to us (even people in masks!—secretly) and thanked us for standing there. They were surprised that we were from the Moscow Patriarchate [as opposed to the schismatic “Ukrainian Patriarchate”—ed.]. I will write quickly: my teeth are still chattering, but I have to go back.” Fr. Alipy planned to be there until 6:00 a.m. today.