“Blessed is He That Cometh in the Name of the Lord….”

PALM SUNDAY CELEBRATES the glorious and brilliant feast of the Entrance of Jesus into Jerusalem. Zechariah had prophesied the entrance of the Messiah into Jerusalem, saying: "Rejoice greatly ... O daughter of Jerusalem; behold, the King comes unto Thee; he is just, and having salvation; lowly, and riding upon an ass, and upon a colt the foal of an ass" (Zech. 9:9). The contemporary Jews associated this prophecy with the expected Messiah. This action of Christ testifies to His nature as Savior, but with the definite declaration that His Kingdom: was not of this world.
admin | 31 March 2007

(Palm Sunday services are held in the morning and consist of Matins [Morning Prayers] and the Divine Liturgy.) 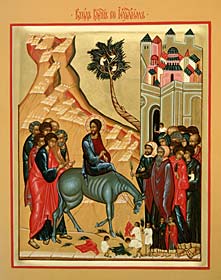 PALM SUNDAY CELEBRATES the glorious and brilliant feast of the Entrance of Jesus into Jerusalem. Zechariah had prophesied the entrance of the Messiah into Jerusalem, saying: “Rejoice greatly … O daughter of Jerusalem; behold, the King comes unto Thee; he is just, and having salvation; lowly, and riding upon an ass, and upon a colt the foal of an ass” (Zech. 9:9). The contemporary Jews associated this prophecy with the expected Messiah. This action of Christ testifies to His nature as Savior, but with the definite declaration that His Kingdom: was not of this world. The news that Christ was in Bethany provoked a general enthusiasm of acceptance, but also of indignation among the High Priests, who had decided to kill Christ. The main road leading to Jerusalem was covered with palm trees. The multitudes, with palm branches in their hands, spread their cloaks on the road as a show of respect, crying out, “Hosanna to the Son of David, — blessed is He that comes in the name of the Lord.” All the actions and words of the people and of Christ had a Messianic meaning readily recognized by the Jews of that time. As usual, Christ went immediately to the Temple, where He prayed and taught. That evening He departed for Bethany.

A custom of distributing branches of palms to the people in the Church prevails to this day, commemorating the victory of Christ against the evil powers.

The triumphant entry of Jesus into the city of Jerusalem before His passion, was celebrated with particular solemnity since the first centuries of Christianity. It is always celebrated on the Sunday before Easter with the blessing of branches.

In liturgical books, the feast is referred to as Palm Sunday or Vaj Sunday (Gr. balon—palm branch) for, on that Sunday, palm-branches were blessed and distributed to the faithful. Popularly it was also called Willow Sunday (Verbna Ned’ilja) because in Europe, pussy-willows were blessed instead of palms. It is also known as Flower Sunday (Cvitna Nedilja) since in and near Constantinople they used to distribute early spring flowers, such as branches of lilac or elder, to the faithful. (cf. Constantine Proph. in P.C. 112, 412).

From ancient times, palm-branches were symbols of victory and triumph. The Romans used to reward their champions of the games with palm-branches. Also military triumphs, i.e. the celebrations of victory, were observed with palms. It seems that the Jews followed the same custom (Lev. 23:40; I Macc. 13:37) of carrying palm-branches on their festive occasions. That is what happened during the solemn entry of Jesus into the Holy City before His last Passover (Jn. 12:13)

In the New Testament, the palm-branches become a symbol of martyrdom (Apoc. 7:9) meaning victory over death. For this reason in Christian art martyrs were usually represented with palms in their hands. These branches were usually cut from date-palms (Cr. foinix) as witnessed by St. Cyril of Jerusalem (d. 387) in his tenth catechesis (P.C. 33, 688A). Referring to the scriptural text of Ps. 92 (91): 12-13: “Palm tree—planted in the house of Cod,” according to the Septuagint translation, palm-trees also represented paradise. In ancient art Jesus often was portrayed in heaven amid palms.

The word “loinix” (date-palm) became also confused with the legendary bird—phoenix, believed to revive from its ashes. Thus, since the end of the fourth century, the palm-branch also became a symbol of the Resurrection. (P.C. 33, 1025-1028).

Jesus Christ, after raising Lazarus (Jn. 11:1-44), was finally recognized by the Jewish people as their Messiah. When He arrived in Jerusalem to celebrate the Passover, they greeted Him with a triumphant welcome. The Evangelist, however, hastened to remark that it was done in fulfillment of a prophecy (Mt. 21:4-5).

When the Apostles saw the enthusiastic crowds, they brought a donkey colt and made their Master ride upon it, while the people spread their cloaks and strewed “branches from the trees” (Mt. 21:8) on the road in front of Him. Others took “branches of palms” (Jn. 12:13) in their hands and, cheering, cried out: “Hosannal Hosanna to the Son of David! Blessed is He Who comes in the name of the Lord! Hosanna in the highest!” (Mt. 21:9).

As Jesus was entering the city, surrounded by the excited crowds, the Scribes and the Pharisees became alarmed and decided to stop Him at any cost. But the people kept acclaiming Him as their Messiah, saying: “This is the Prophet, Jesus from Nazareth in Galiless!” (Mt. 21:10).

From earliest times, the Christians in Jerusalem celebrated this event with great joy and solemnity, reenacting Christ’s triumphant entry into their city. This is described by the Spanish pilgrim, nun Egeria, in her diary written toward the end of the fourth century, thus:

“As the eleventh hour (our 5:00 P.M.) draws near, that particular passage from Scriptures is read in which the children, bearing palms and branches, came forth to meet the Lord, saying:

“Blessed is He Who comes in the name of the Lord!” (Mt. 21:9). The Bishop and the people rise immediately and walk down from the top of the Mount of Olives, responding continually:

‘Blessed is He Who comes in the name of the Lord!’ to the hymns and antiphons. All the children who are present bear branches, some carrying palms, others olive branches. And the Bishop is led in the same manner as the Lord was led (riding on a donkey). They move very slowly so that the people would not tire. By the time they arrive at the Anastasis (Basilica of Resurrection), it is already evening and Vespers is celebrated.” (Egeria, Diary of a Pilgrimage, 31).