The Life of Blessed Matrona

People came to her with their troubles, with their spiritual and bodily ills. She refused help to no one, except those who came with malicious intentions. Some thought that Matushka was a folk healer, capable of removing a curse or the evil eye, but after speaking with her they realized that she was a person of God and turned to the Church and its salvific Mysteries. Her help was unmercenary; she took nothing from anyone.
admin | 02 May 2006 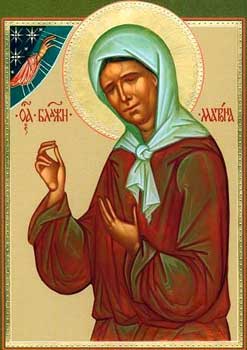 The Blessed Matrona was born in 1885 in the village of Sebino, Tula region, to the poor family of Dimitry and Natalia Nikonov. Matrona was not only blind from birth, but had no eyes at all; yet the Lord gave her spiritual vision. From her earliest years the Blessed Matrona could not only see people’s sins and transgressions, but even their thoughts. She could sense the approach of dangers, foreseeing natural and society calamities. Through her prayers people received healing from illness and consolation in afflictions. Dragging carts and wagons with the ill, people came to the Nikonovs’ hut, to the blind girl, from other villages, the entire region, and even other provinces. They brought those who lay sick, whom the girl raised to their feet.

Wishing to thank Matrona, they left food and gifts for her parents. In such a way, the girl, rather than being a burden, became the breadwinner. In 1925 Matrona moved to Moscow, living there until the end of her life. Living for nearly three decades in Moscow, she performed a spiritual and prayerful ministry that saved many from perdition, leading them to salvation. The help that Matrona gave to the ill had nothing to do with charmers, fortune-tellers, and so-called folk healers and other magical dealings, but was of a true Christian nature. The righteous Matrona was therefore hated by sorcerers, as is witnessed by those who knew her well during the Muscovite period of her life. Above all Matrona prayed for people. As a righteous one of God, richly endowed with gifts from on high, she asked of the Lord miraculous help for the suffering.

When the war [WWII] began, the blessed one asked everyone who came to her to bring pussy willow branches. She broke them to equal size, removing the bark and praying. People who knew her remember that her fingers were covered in wounds. Matrona could be spiritually present in different places, for space did not exist in her spiritual vision. She often said that she was invisibly present on the fronts, helping our soldiers. Matronushka received up to forty people daily.

People came to her with their troubles, with their spiritual and bodily ills. She refused help to no one, except those who came with malicious intentions. Some thought that Matushka was a folk healer, capable of removing a curse or the evil eye, but after speaking with her they realized that she was a person of God and turned to the Church and its salvific Mysteries. Her help was unmercenary; she took nothing from anyone.

Matushka always said her prayers loudly. She emphasized that she herself was not the one helping, but rather God through her prayers: “What, Matronushka is God, is that it? It is God that helps!” Healing the sick, Matushka required that they have faith in God and reform their sinful lives. She once asked a visitor whether she believed that the Lord was capable of healing her. Another, who suffered from epilepsy, she ordered not to miss a singe Sunday service, and each time to go to Confession and Commune of the Holy Mysteries of Christ. She blessed those living in a civil marriage to marry in Church without fail. She required everyone to wear a cross.

Matronushka often said: “If the people lose faith in God, they will undergo calamities, and if they do not repent, they will perish and disappear from the face of the earth. How many nations have disappeared, but Russia has existed and will continue to exist. Pray, ask, and repent! The Lord will not leave you.” She reposed on May 2, 1952.

Before her repose the Blessed Matrona said: “Everyone, everyone who will come to me: tell me, as if I were alive, of your sorrows, and I will see you, and hear you, and help you.”

The blessed one’s funeral and burial marked the beginning of her glorification among the people as a saint. “After my death few people will visit my grave, only close friends, and when they die my grave will be abandoned,” the Blessed Matrona prophesized. “But after many years people will hear about me and come in crowds for help in their sorrows and with requests for prayer for them to the Lord God, and I will help everyone and listen to everyone.” Matushka also said that everyone who trusted in her and in her intercessions before the Lord would be saved. “Everyone who turns to me for help I will meet at their death, every one of them.” The Blessed Matrona’s memory is celebrated on April 19 (May 2 on the New Calendar).

Chosen by the Holy Spirit from thy swaddling clothes O blessed eldress Matrona, / Thou didst receive bodily weakness and blindness from God for spiritual cleansing, / Thou wast enriched with the gift of foresight and wonderworking and hast been adorned with an incorruptible crown from the Lord. / Wherefore, we offer thee crowns of praise, in gratitude crying out: / Rejoice O righteous mother Matrona, fervent intercessor before God for us!

An angel in the flesh wast thou revealed to be, O blessed Matrona, fulfilling the will of God. Though thou wast born in bodily blindness yet the Lord who maketh wise the blind and loveth the righteous enlightened thy spiritual eyes that thou mightest serve His people and the things of God were made manifest through thee. Wherefore with love we sing to thee such things as these:

On Friday night, Oct. 25, three days after they had been captured, I had the dream.…