In honor of Maslenitsa [Cheesefare Week], we offer this great story/essay by Chekhov on bliny, which originally ran in the April 1996 issue of Russian Life.

Did you know that bliny have been around for over a thousand years, since what is known as the old Slavonic ab ovo…? They appeared on earth before Russian history began and have lived through it all from the beginning to the last page, without any doubt, invented, like the samovar, by Russian minds. In anthropology they should have as honored a place as twenty-foot ferns and stone knives; if we still haven’t had any scientific research done on bliny, then that can only be because eating bliny is much easier than racking your brains over them…

Times change and ancient customs, dress and songs are gradually disappearing in Russia; much has gone already, and is only interesting historically, but meanwhile such triviality as bliny occupies the same firm and established place in the repertoire of today’s Russia as it did 1,000 years ago. Nor is their end in sight…

Bearing in mind the respected age of bliny and their extraordinary steadfastness, certified by the centuries, in the struggle against innovation, it is sad to think that these tasty lumps of batter serve only narrow culinary and gastronomic purposes… Sad because of their antiquity, and their exemplary and purely Spartan steadfastness… Law, cuisine and stomachs do not last a thousand years.

As for me, I’m almost certain that these most eloquent elder statesmen have other ultimate purposes than the culinary and gastronomic… Besides the heavy and barely digestible batter, there is something more lofty, symbolic, even perhaps prophetic concealed in them… But what exactly?

I don’t know and I will never know. It constituted and constitutes hitherto… a deep, impenetrable womanly secret, about as difficult to crack as it is to force a bear to laugh… Yes, bliny, their meaning and destiny are the secret of a woman, one which men are not likely to find out soon. That’s a good subject for an operetta.

Since prehistoric times the Russian woman has religiously kept this secret, passing it down from generation to generation, exclusively from mother to daughter and granddaughter. If, God forbid, just one man were to find it out, then something would happen so terrible that even women couldn’t imagine. Neither wife, nor sister, nor daughter… no woman will give away this secret to you, however dear you are to her, however far she has fallen. This is not a secret to be bought or bartered. No woman will utter it, not in the heat of passion, not in delirium. In a word, this is the only secret which has, over the course of 1,000 years, been able to avoid leaking through that fine sieve which is the fairer sex! 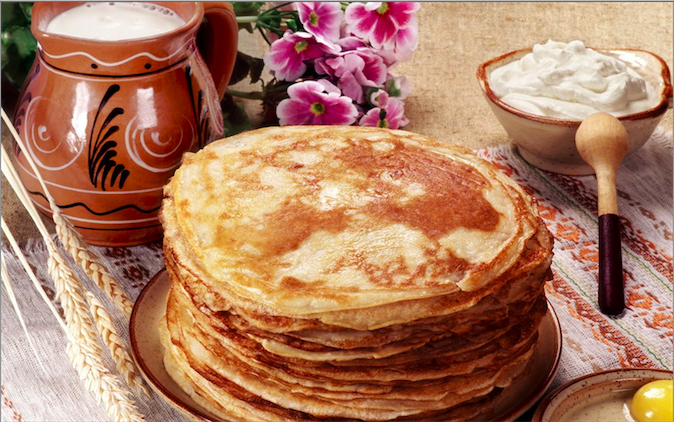 How are bliny baked? This is not known… Only the distant future will find out, we, meanwhile, should not analyze or ask questions, but just eat what we are given… It’s a secret!

You will say that men make bliny too… Yes, but men’s bliny are not bliny. A cold wind issues from their nostrils, they have the texture of rubber galoshes and their taste is far inferior to women’s… Male cooks should withdraw and admit defeat…

Making bliny is an exclusively female affair… It is high time that male cooks realized that it’s not just a process of pouring batter into hot frying pans, but a solemn rite, a whole complex system encompassing beliefs, traditions, language, prejudices, joys and suffering… Yes, suffering… If [Nikolai] Nekrasov said that the Russian woman is worn out by suffering, then it is bliny which are partly to blame…

I don’t know what the process of making bliny consists of, but I have some notion of the mysteriousness and ceremony with which woman has surrounded this ritual… There is much mysticism, fantasy and even spiritualism involved… If you watch a woman making bliny, you may get the impression that she is summoning up spirits or extracting a philosophical stone from the batter.

First of all, no woman, however enlightened, would under any circumstances start making bliny on the 13th or on the eve of the 13th, or on Sunday evening or Monday. At these times bliny don’t turn out well. Many shrewd women get round this by starting their baking long before maslenitsa, so that the household has the chance to eat bliny on maslenitsa Monday and on the 13th.

Second, the evening before making the bliny, the mistress of the house always whispers something secretly to the cook. They whisper and look at each other with eyes like they were composing a love letter… After the whispering, they usually send Yegorka the kitchen boy to the shop to buy yeast… The housekeeper then stares for a long time at the yeast, sniffs it, and however ideal it is, will undoubtedly say:

“This yeast is no good. Go and tell them to give you some better stuff, you wretched boy…”

The boy runs off and brings some new yeast… Then a large clay jar will be fetched and filled with water, and the yeast dissolved in it with a little flour… When the yeast is in, the mistress of the house and the cook go pale, cover the jar with an old cloth and put it in a warm place.

“Make sure you don’t oversleep, Matryona…” whispers the mistress. “And keep the jar in a warm place at all times!”

There follows an anxious and wearisome night. Both the housekeeper and the cook suffer from insomnia, and if they sleep, then they are delirious and have terrible dreams… How lucky you men are that you don’t make bliny!

Before the gloomy morning starts to lighten, the mistress of the house, barefoot, straggly haired and dressed in just a nightshirt runs down to the kitchen.

“Well? How is everything?” she says, hurling her questions at Matryona. “Answer me then!”

Matryona, meanwhile, is standing by the jar and pouring buckwheat flour into it…

Third, the women watch closely to make sure that no male, whether from the household or an outsider, enters the kitchen while bliny are being made… Cooks will not even let firemen in at this time. No one is allowed to enter, have a look or ask any questions… If anyone should look into the clay jar and say: “What excellent batter!” then you may as well pour it away because the bliny won’t be a success! What women say or what spells they read during the making of bliny, no one knows.

Exactly half an hour before the batter is poured into the frying pan, the red-faced and by now exhausted cook pours a little hot water or warm milk into the jar. The mistress stands beside her. She wants to say something, but under the influence of holy terror is unable to speak. The other members of the household, meanwhile, pace around the rooms in expectation and, looking into the face of the housekeeper as she keeps rushing into the kitchen, get the feelings that there is someone giving birth there, or, at the least, getting married.

Then at last the first frying pan hisses, then a second, a third… The first three bliny are defective — Yegorka can eat those… but the fourth, fifth, sixth etc. go onto the plate, are covered with a napkin and carried into the dining room to the craving diners. The woman of the house, red-faced, beaming and proud, brings the bliny herself… Anyone would think she had in her arms not bliny, but her firstborn.

So how is this triumphant sight to be explained? By evening, the lady and the cook are too tired to either stand or sit. They really look as if they are suffering… A little more, it seems, and they’ll give up the ghost.

That’s the superficies of the sacred rite. If the bliny were meant exclusively for the ignoble satisfaction of the stomach, then let’s face it, neither the mysteriousness, nor the nighttime activities, nor the suffering would be comprehensible… Obviously there is something there, and this ‘something’ is carefully hidden.

When you look at the ladies, you can certainly draw the conclusion that, in the future, bliny are going to carry out some great mission of world importance. 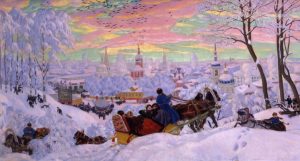 Russians generally have a bad rap as being dour and grumpy. Some Russians will even agree… 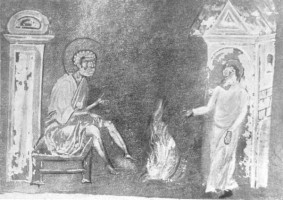 At first the weather was fine and still. The thrushes were calling, and in the swamps… 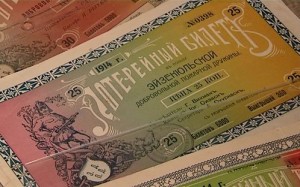 IVAN DMITRITCH, a middle-class man who lived with his family on an income of twelve hundred…

At first the weather was fine and still. The thrushes were calling, and in the swamps close by…