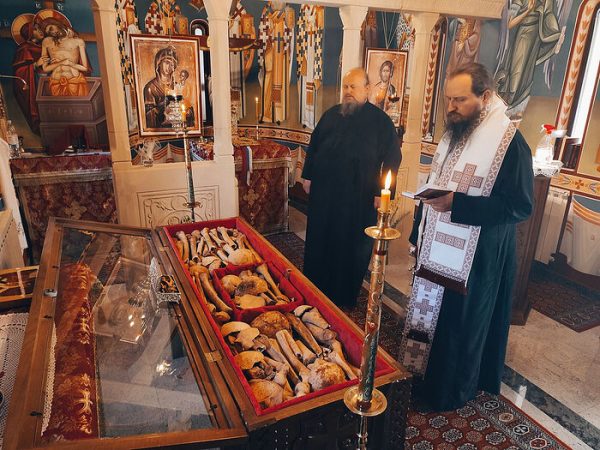 The remains of several martyrs were discovered during restoration work at a 15th-century Serbian Orthodox monastery in Bosnia earlier this month.

The holy relics “were literally embedded in the foundation of the sacred monastery and preserved it in difficult and stormy times,” the Serbian Diocese of Bihać and Petrovac reports about the renovations at St. Nicholas Rmanj Monastery.

Among the discovered remains were those of ten monks, priests, and laborers, including those of the well-known 19th-century Hieromartyr Cvijo Zorić, a widowed priest whom the people considered an honorary monk due to his virtuous life. He was worked to death by the local ruler, whose cruelty towards the Orthodox is documented in the memoirs of the English archaeologist John Arthur Evans.

On April 5, His Grace Bishop Sergije of Bihać and Petrovac placed the relics in a specially made reliquary. The holy remains, which were once embedded and preserved in the foundation of the monastery, will not remain in the church for the veneration of the faithful.

The diocese considers it providential that the relics should be found now, when the area is experiencing a great Orthodox revival.

The Rmanj Monastery was built in 1443, and has been a spiritual center for the local Serbian Orthodox ever since. The local diocese was based there for more than a century. During the Ottoman period, it was razed to the ground several times. The last great ruin came in 1944 when the Nazis completely destroyed the monastery by bombing. It was restored with great difficulty in the 1980s, but it was robbed and severely damaged by Croatian troops during the war in 1995. The monastery was rebuilt and consecrated in 2001. Rmanj Monastery was proclaimed a National Monument of Bosnia and Herzegovina in 2007.