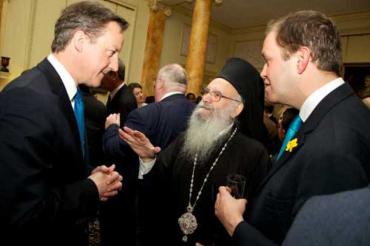 For the first time in Britain, a free Greek Orthodox secondary school has been given the go-ahead to open its doors in September next year, aiming to meet high academic standards while providing the Cypriot community in the UK with a strong Orthodox element within school.

“St Andrew the Apostle is based on the Christian faith and moral principles of the Greek Orthodox church, and we are delighted to be working with the Russell education trust (RET) to establish a school with the very highest academic standards,” said the chairman of the classical education trust (CET), Yiannis Pareas.

The school will serve students aged 11 to 19.

There are around 300,000 UK citizens of Cypriot descent living in England with the vast majority based in London, but the opportunity for a freely available Greek Orthodox education has long been lacking. With the opening of St Andrew the Apostle, parents in north London, at least, will be given the chance to send their children to an Orthodox Christian faith school focusing on modern languages, maths, sciences, and the classics.

The school is funded by the government, as part of the Conservative government’s free schools initiative, which saw the first schools open in September 2011. Groups – parents, teachers, charities – can propose and establish schools to suit their goals and needs. In September 2011, 24 free schools opened, around 50 are due to open this September, and the department of education lists 102 approved for a 2013 opening, including St Andrew. Successful applications convince the government of a sound financial and academic plan, sufficient local demand, and professional backing.

Because St Andrew the Apostle, though a state-funded free school, is also a school of religious designation it can reserve 50 per cent of its intake first for students of the Greek orthodox faith and then for students of other faiths. The remaining spaces will be determined based on applicants’ distance from school: residents who live the closest to school will have priority.

As a free, state-sponsored school the language of instruction is in English. The school is allowed to offer Modern Greek and the classics as part of the government’s statutory curriculum.

For a large proportion of the Greek Cypriot community in Britain, developing a reasonable level of fluency in Greek becomes increasingly difficult for the children and grand-children of the original immigrants.

Pareas acknowledges that and hopes that at some point the school will be able to offer extra Greek classes.

“If it can be stretched to include classes for adults, we should be trying to do that too. It is up to the community and the school governing body if these could be done,” he said. “The priority at the moment is to set up the school – everything else will come with time, patience and determination.”

Although the idea of a Greek school had floated about the community for a while, it was the launching of the free schools initiative that instilled some necessary focus.

Pareas happened to attend an event a couple of years ago where he got chatting to Archbishop Gregorios of Thyateira and Great Britain, who said he would support a Greek faith school.

“So we decided to start something,” Pareas said and soon formed CET, the classical education trust, and a week later Pareas went to a conference on free schools.

One of the academic sponsors with the experience to help was RET, the Russell Education Trust, which helped the CET put together an application which would convince the state there was both will and demand for St Andrew the Apostle.

The RET, which specialises in secondary education, has been successful in opening free schools, including the largest in 2011 in Bristol and the largest one due to open this year, the Becket Keys church of England school in Essex.

She added that with the application out of the way, they now needed to help recruit resources, get the right staff, finalise the site of the school (probably in Enfield), and “operate the school for the community”.

As expected of a faith school, children will be encouraged to attend their church and there will be a religious flavour to assemblies as well as collective worship.

But Lynch said that students from all faiths or none are welcome and religious teaching will include all major religions.

“We will make sure that children have a good understanding of all major faiths,” Lynch said.

“Because of its traditional emphasis on good behaviour, good discipline, respect for family, high work and high standards,” the school has already been attracting non-faith or other faith families including Muslim and Sikh families, Lynch said.

Many parents have wanted a high calibre school and “a number of them felt they could only get by getting in the independent sector,” Lynch said.

Pareas said that it took them a couple of years to get the application just right but the enthusiasm from the north London Greek Cypriot community as well as the feedback they received, alongside with RET’s help enabled them to put together a “fantastic application”.

“It will be the hub for the community: there’ll be Greek concerts, inviting people from abroad to talk about Greek culture and tradition… holding of school activities, the whole community will come together because of that,” Pareas said.

Already, a teenager on social media site twitter said her “yiayia” – i.e. her grandmother – wants her to move to St Andrew and a man tweeted that his daughter was asking what colour her uniform would be.

And because in its first year, the school will only admit the bottom year, year 7, rather than open admissions for all years, it will grow as those first students are growing.

Lynch said that they have seen students in their Bristol school take responsibility for the school. “You build [the school] from the bottom,” she said.

The first intake should be 150 students spread over six classes. Lynch said.

And though it may welcome all faiths and races, the school’s “soul… is the Greek orthodox faith,” Pareas said.

“British Cypriots hold values and traditions more strongly than they are in Cyprus.”

“We still do the traditional Greek dances,” Pareas said by way of example.

“Holding on to the Greek identity: this is why we need [the school],” he said.

Most viewed articles
Faith and Moral Freedom78
Patriarch Kirill: “The Memory of the New Martyrs will Help Us to Be Faithful to Christ amid Modern Temptations”72
Bishop Nicholas of Manhattan visits Holy Cross Monastery in West Virginia61
Lord, Save Me!58
Patronal Feast Celebrated in St. Anna Convent in Vashkivtsi41
Condolences of Patriarch Kirill over the death of believers in the fire that broke out in Abu-Seifein Church in Cairo33
The Trap of Religiosity30
St. Tikhon Church to host Liturgical Music Symposium in October 20224
Most popular authors
Pravmir.com team211
Archpriest Michael Gillis78
Fr. Theodore Stylianopoulos58
Vasileios Stoyiannos30