Source: OCA
We all need to have a more positive outlook toward the people of our cities. We cannot look down on them, despise them, fear them, ghettoize them. We need to care about them as a Church.
Archpriest Thomas Mueller | 20 November 2014 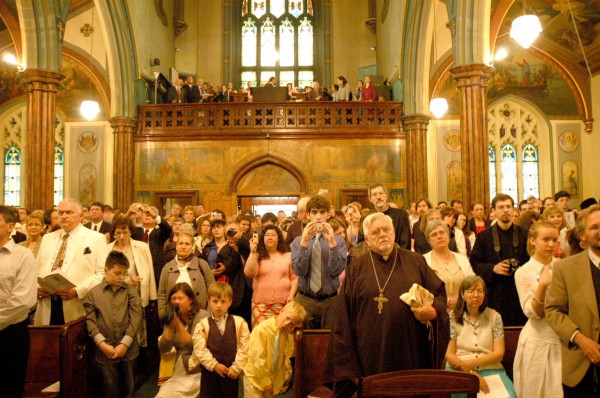 My own special experience has involved working out one scenario for regenerating an old urban parish. In the Orthodox Church in America, our pattern for the past 50 years has generally been to establish new missions or to transplant parishes in suburban settings, or more recently in localities that never had any Orthodox presence before. I’m not criticizing this. But it has not expanded our mission and witness broadly enough because almost invariably our outreach has been to upwardly mobile or comfortably settled white Americans. In many cases, we have just given up on the city or left aging parishes in the inner city to decline and wither away. (Saints Peter and Paul in Detroit is prime example of this.)

Saints Cyril and Methodius Church in Milwaukee was just such an aging parish considering flight to minority-free suburbs in 1984. Proponents of this move explicitly referred to getting away from “Hispanics.” But we chose to stay where we were, three miles southwest of downtown in a blue collar, largely Mexican-American neighborhood, with some mixture of Puerto Ricans, whites, and African-Americans.

We got involved with the neighborhood, determined not just to “exist” here as an “island,” but to interact positively with and to enhance the quality of life in the neighborhood. We offered a weekly free After School Arts program for 15 years, sponsored neighborhood clean-up and block watch, provided a free summer Block Party for over 15 years, conducted free ESL classes for the last couple of years, worked on urban issues like public education and immigration, and made and served meals at a women’s homeless shelter for 20 years. These activities have not drawn many Latino parishioners into what is an Anglophone church. But they have put us on the map in the city and among people who care about the city. We have presented ourselves as good neighbors, like the Samaritan of the Gospel. And the outreach activities have provided our parishioners with opportunities to serve Christ in His people. This positive, proactive mindset has bolstered parish morale and vitality, and this in turn has made the parish attractive to newcomers, particularly young singles and families, and to seekers who value positive engagement with humanity. A side effect: no one has time for or interest in parish politics. The size of the parish has doubled since 1984.

Another way we have expanded our mission here has been to reach out to Orthodox ethnic groups that do not have a parish here – particularly Ethiopians and Romanians. This has meant fostering an atmosphere of acceptance and equality, where people of every ethnic group are treated as peers in every way, and there is no ethic in-group (including that of ethnic Americans), and where we are open to diverse customs and even modes of liturgical music. The diversity of the parish acts as a magnet and builds on itself, because it is rich and exciting and a sign of Pentecost. Some 35-40% of the parish is comprised of immigrant families, who tend to be younger, with children, thus attracting younger American families with kids. The multiracial character of the parish affords an easier entrée for American blacks as well.

Other Midwest Diocese parishes are hosting FOCUS programs in their facilities — Archangel Michael in St. Louis, MO; Saints Peter and Paul in Detroit, MI; Holy Trinity in Saint Paul, MN; and probably others. Saint Gregory of Nyssa in Columbus has set the standard for urban engagement with its own parish meal program and neighborhood enhancement programs over the past four decades. Saint Joseph in Wheaton, IL, has had phenomenal growth, at least in part by welcoming underserved ethnic groups into the heart of its community.

Finally, we all need to have a more positive outlook toward the people of our cities. We cannot look down on them, despise them, fear them, ghettoize them. We need to care about them as a Church. We need to care about urban problems — unemployment, poverty, racism, homelessness, human trafficking, violence. We can’t regard cities as alien, pagan territory, from which we can only flee. In a country that is fast becoming minority-majority and ever more urban, our outlook and our outreach must be broader and more enlightened.