The fundamental difference between Christianity and other beliefs and practices lies in the fact that the Jesus Prayer is based on the revelation of the One true living and personal God as Holy Trinity No other path admits any possibility of a living relationship between God and the person who prays.
Archimandrite Zacharias | 23 January 2009

An Excerpt from The Hidden Man of the Heart

It is unfortunate that there is widespread confusion, not to mention delusion, in the inexperienced, whereby the Jesus Prayer is thought to be equivalent to yoga in Buddhism, or ‘transcendental meditation’, and other such Eastern exotica. Any similarity, however, is mostly external, and any inner convergence does not rise beyond the natural ‘anatomy’ of the human soul. The fundamental difference between Christianity and other beliefs and practices lies in the fact that the Jesus Prayer is based on the revelation of the One true living and personal God as Holy Trinity No other path admits any possibility of a living relationship between God and the person who prays.

Eastern asceticism aims at divesting the mind of all that is relative and transitory, so that man may identify with the impersonal Absolute. This Absolute is believed to be man’s original ‘nature’, which suffered degradation and degeneration by entering a multiform and ever-changing earth-bound life. Ascetic practice like this is, above all, centred upon the self, and is totally dependent on man’s will. Its intellectual character betrays the fullness of human nature, in that it takes no account of the heart. Man’s main struggle is to return to the anonymous Supra-personal Absolute and to be dissolved in it. He must therefore aspire to efface the soul (Atman) in order to be one with this anonymous ocean of the Suprapersonal Absolute, and in this lies its basically negative purpose. 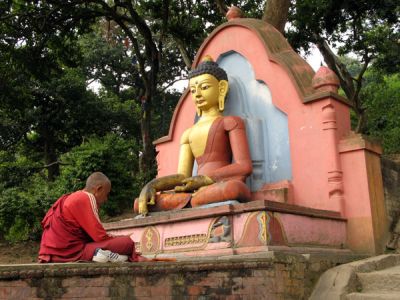 In his struggle to divest himself of all suffering and instability connected with transient life, the eastern ascetic immerses himself in the abstract and intellectual sphere of so-called pure Existence, a negative and impersonal sphere in which no vision of God is possible, only man’s vision of himself. There is no place for the heart in this practice. Progress in this form of asceticism depends only on one’s individual will to succeed. The Upanishads do not say anywhere that pride is an obstacle to spiritual progress, or that humility is a virtue. The positive dimension of Christian asceticism, in which self-denial leads to one’s clothing with the heavenly man, to the assumption of a supernatural form of life, the Source of which is the One True, Self-revealing God, is obviously and totally absent. Even in its more noble expressions, the self-denial in Buddhism is only the insignificant half of the picture. In the mind’s desire to return to its merely ‘natural’ self, it beholds its own nakedness in a ‘cloud of divestiture’. But at this point there is a grave risk of obsession with itself, of its marvelling at its own luminous but created beauty, and worshipping the creature more than the Creator (Rom. 1:25). The mind has by now begun to deify or idolise its self and then, according to the words of the Lord, ‘the last state of that man is worse than the first’ (Matt. 12:45).

Such are the limits of Eastern styles of contemplation, which do not claim to be the contemplation of God, and are in fact man’s contemplation of himself. This does not go beyond the boundaries of created being, nor does it draw anywhere near to the Truth of primordial Being, to the uncreated living God Who has revealed Himself to man. This kind of practice may well afford some relaxation or sharpen man’s psychological and intellectual functions, yet ‘that which is born of the flesh is flesh’ (John 3:6) and ‘they that are in the flesh cannot please God’ (Rom. 8:8).

In order to be authentic, any divestiture of the mind from its passionate attachments to the visible and transitory elements of this life must be linked to the truth about man. When man sees himself as he is in the sight of God, his only response is one of repentance. Such repentance is itself a gift of God, and it generates a certain pain of the heart which not only detaches the mind from corruptible things, but also unites it to the unseen and eternal things of God. In other words, divestiture as an end in itself is only half the matter, and it consists of human effort operating on the level of Created being. Christianity on the other hand, enjoins the ascetic to strive in the hope and expectation that his soul will be clothed, invested, with the grace of God, which leads him into the fullness of the immortal life for which he knows he has been created.

Many admire Buddha and compare him to Christ.  Buddha is particularly attractive because of his compassionate understanding of man’s condition and his eloquent teaching on freedom from suffering. But the Christian knows that Christ, the Only begotten Son of God, by His Passion, Cross, Death and Resurrection, willingly and sinlessly entered into the totality of human pain, transforming it into an expression of His perfect love. He thereby healed His creature from the mortal wound inflicted by the ancestral sin, and made it ‘a new creation’ unto eternal life. Pain of heart is therefore of great value in the practice of prayer, for its presence is a sign that the ascetic is not far from the true and holy path of love for God. If God, through suffering, showed His perfect love for us, similarly, man has the possibility, through suffering, to return his love to God.

Consequently, prayer is a matter of love. Man expresses love through prayer, and if we pray, it is an indication that we love God. If we do not pray, this indicates that we do not love God, for the measure of our prayer is the measure of our love for God. St. Silouan identifies love for God with prayer, and the Holy Fathers say that forgetfulness of God is the greatest of all passions, for it is the only passion that will not be fought by prayer through the Name of God. If we humble ourselves and invoke God’s help, trusting in His love, we are given the strength to conquer any passion; but when we are unmindful of God, the enemy is free to slay us.

Orthodoxinfo webmaster note: The title was added for publication on this site. The untitled excerpt is from Chapter 5, “The Building Up of the Heart by Vigilance and Prayer”.

From The Hidden Man of the Heart: The Cultivation of the Heart in Orthodox Christian Anthropology, by Archimandrite Zacharias (Waymart, PA: Mount Thabor Publishing, 2008), pp. 66-68. Copyright 2008, The Stavropegic Monastery of St John the Baptist, Essex, UK. Posted on 8/9/2008 with the permission of the publisher.