Building of an Orthodox Church in Bangkok going on full scale 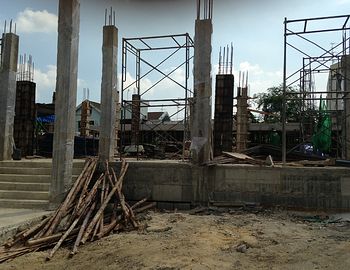 The representative of the Russian Orthodox Church in the kingdom of Thailand Archimandrite Oleg (Cherepanin), accompanied by his assistant Vladimir Buntilov, has visited the building area of the new Church in Bangkok where he familiarized himself with the work. Archimandrite Oleg noted that on the whole, work is being carried out in accordance with the approved schedule. By now the foundation and the plinth of the Church building have been completed, underground storage rooms have been arranged, concrete buttresses of walls and hipped coverings of the Church have been built and concrete stairs have been partially constructed.

Concurrently with the church, work on construction of the office building of the Representation of the Russian Orthodox Church in Thailand is being carried out.

The head of the building company that is building the church in Bangkok has assured that completion of all building and major finishing works is expected in late September–mid-October 2013. Some delay is possible in the case of floods or days-long heavy showers during the coming rainy season, reports the website of the Representative of the Russian Orthodox Church in the kingdom of Thailand.