It is said that the Emperor Constantine, as he was preparing his troops for the battle that would make him the ruler of the western part of the Roman Empire, had a vision of a Cross of brilliant light superimposed upon the sun; and he heard a voice say to him, “By this sign you will conquer.”
Priest John McCuen | 27 September 2010 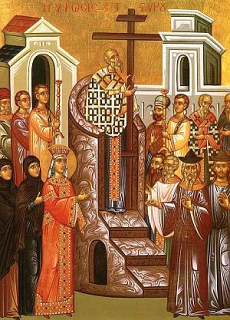 It is said that the Emperor Constantine, as he was preparing his troops for the battle that would make him the ruler of the western part of the Roman Empire, had a vision of a Cross of brilliant light superimposed upon the sun; and he heard a voice say to him, “By this sign you will conquer.” He ordered his men to put the sign of the Cross on their shields; and he was, indeed, victorious in battle that day. The Emperor, a pagan at that time, later issued the Edict of Milan, which ended the persecution of Christians in the Roman Empire; and he would also summon the Council of Nicaea in the year 325 to put to an end the dissension in the Church aroused by the heretical teachings of Arius. He became a Christian as his death drew near; and the Church recognizes him as St. Constantine the Great.

When the Empress Helena, Constantine’s mother, went to Jerusalem to find the Cross of our Lord, it was discovered that the site of our Lord’s Crucifixion had been covered by a temple to the Goddess Diana. Excavating the site, three crosses were found. How would it be possible to determine the True Cross? The Patriarch Macarius was able to discern a way. As a funeral procession passed by, he directed that the person being taken to be buried be placed on each cross. With the first two, there was no effect; but, when the corpse was placed on the Cross of our Lord, life was immediately restored to that person. After that, a woman who was ill was placed on the Cross, and she was healed. In this way, the True Cross was revealed, and was venerated by all as the precious and holy life-giving Cross..