Source: Orthodoxy Today
I recently had a conversation with an Eastern Orthodox priest, whose twenty-six year old son recently left home for an indefinite stay at a Buddhist monastery. The priest was heart broken. His son was not a stranger to Eastern Orthodoxy or to its monastic tradition either, having spent time at several Orthodox monasteries, and even two months on the holy mountain of Mt. Athos.
Kevin Allen | 25 July 2010

I recently had a conversation with an Eastern Orthodox priest, whose twenty-six year old son recently left home for an indefinite stay at a Buddhist monastery. The priest was heart broken. His son was not a stranger to Eastern Orthodoxy or to its monastic tradition either, having spent time at several Orthodox monasteries, and even two months on the holy mountain of Mt. Athos. His son’s journey to a non-Christian Eastern religious tradition is not an isolated event. Eastern religions in North America are a growing and competing force in religious life with Christianity. Buddhism is now the fourth-largest religious group in the United States, with 2.5 – 3 million adherents, approximately 800,000 of whom are American western “converts”. There are more Buddhists in America today than Eastern Orthodox Christians! The Dalai Lama (the leader of one of the Tibetan Buddhist sects) is one of the most recognized and admired people in the world and far better known than any Eastern Orthodox hierarch. Look in the magazine section of Borders or Barnes and Noble. You will find more publications with names like “Shambala Sun“, “Buddhadharma”, and “What is enlightenment?” than Christian magazines! 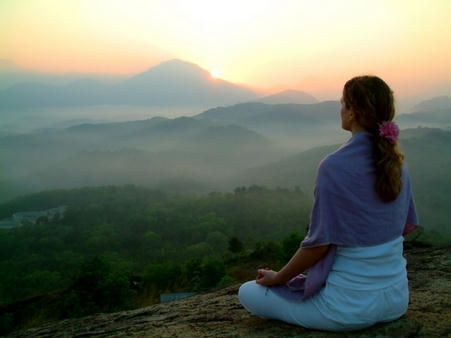 In addition to losing seekers (many of them youth) to non-Christian eastern spiritual traditions, eastern metaphysics have seeped into our western culture without much notice. For example, think of how often one hears the phrase “that’s good (or bad) karma”. Karma is a Hindu word that has to do with the consequences of deeds done in a previous life (reincarnation)! They are doing a better job (sadly) “evangelizing” our culture than we Eastern Orthodox Christians are!

The Lord Himself commands us clearly “that repentance and remission of sins (baptism) should be preached in His name to all nations” (Luke 24:47). Buddhists (of which there are many sects) and Hindus live among us in America in ever-growing numbers right in our own backyards — in our college classrooms, on our soccer fields, shopping in our “health foods” stores. They are a rich, potential “mission field” for the Eastern Orthodox Church in the United States. Unfortunately with few exceptions, like the writings of Monk Damascene [Christensen] and Kyriakos S. Markides, we are not talking to this group at all.

As a former Hindu and disciple of a well-known guru, or spiritual teacher, I can tell you Orthodox Christianity shares more “common ground” with seekers of non-Christian spiritual traditions of the east than any other Christian confession! The truth is when Evangelical Protestants attempt to evangelize the eastern spiritual seeker they often do more harm than good, because their approach is culturally western, rational, and legalistic-juridical with (generally) little understanding of the paradigms and spiritual language (or yearnings) of the seekers of these eastern traditions.

There are three “fundamental metaphysical principles” that Buddhists and Hindus generally share in common:

1. A common “supra-natural” reality underlies and pervades the phenomenal world. This Supreme Reality isn’t Personal, but Trans-personal. God or Ultimate Reality in these traditions is ultimately a “pure consciousness” without attributes.

2. The human soul is one in essence with this divine reality. All human nature is divine at its core. According to these traditions, Christ or Buddha isn’t a savior, but simply a paradigm of self-realization, the goal of all mankind.

3. Existence is in fundamental unity (monism). Creation isn’t what it appears to the naked eye. It is in essence “illusion”, “unreal” and “impermanent”. There is one underlying ground of being (think “quantum field” in physics!) which unifies all beings and out of which and into which everything can be reduced.

What do these metaphysics have in common with our Eastern Orthodox faith? Not much, on the surface. But in the eastern non-Christian spiritual traditions, knowledge is not primarily about the development or dissemination of metaphysical doctrine or theology. This is one of the problems western Christians have communicating with eastern seekers. Eastern religion is never theoretical or doctrinal. It’s about the struggle for liberation from suffering and death. This “existential” emphasis is the first connection Eastern Orthodoxy has with these traditions, because Orthodoxy is essentially transformative in emphasis.

The second thing we agree on with Buddhists and Hindus is the corrupted state of humanity and human consciousness. The goal of the Christian life according to the Church Fathers is to move from the “sub-natural” or “fallen state” in which we find ourselves (subject to death), to the “natural” or the “according to nature state” after the Image (of God), and ultimately to the “supra-natural” or “beyond nature” state, after the Likeness (of God). According to the teaching of the holy fathers the stages of the spiritual life are purification (metanoia), illumination (theoria) and deification (theosis). This paradigm of spiritual formation and transformation is unique to Eastern Orthodox practice within Christendom. While we don’t agree with Buddhists or Hindus on what “illumination” or “deification” is, we agree on the basic diagnosis of the fallen human condition. As I once said to a practicing Tibetan Buddhist: “We agree on the sickness (of the human condition). Where we disagree is on the cure”.

Eastern Orthodoxy – especially the hesychasm (contemplative) tradition – teaches that true “spiritual knowledge” presupposes a “purified” and “awakened” nous (Greek), which is the “Inner ‘I’” of the soul. For Eastern Orthodox the true theologian isn’t one who simply knows doctrine intellectually or academically, but one “who knows God, or the inner essences or principles of created things by means of direct apprehension or spiritual perception.” As a well-known Orthodox theologian explains, “When the nous is illuminated, it means that it is receiving the energy of God which illuminates it…” This idea resonates with eastern seekers who struggle to experience – through non-Christian ascesis and/or occult methods – spiritual illumination. Most eastern spiritual seekers are not aware that the opportunity for profound spiritual illumination, which ourhesychasm tradition calls “theoria”, exists within a Christian context.

As part of their spiritual ascesis, Buddhist and Hindu dhamma (practice) emphasizes cessation of desire, which is necessary to quench the passions. Holy Tradition teaches apatheia, or detachment as a means of combating the fallen passions. Hindu and Buddhist meditation methods teach “stillness”. The word hesychia in Holy Tradition – the root of the word for hesychasm – means “stillness”! Buddhism, especially, teaches “mindfulness”. Holy Tradition teaches “watchfulness” so we do not fall into temptation! Hindus and Buddhists understand it is not wise to live for the present life, but to struggle for the future one. We Orthodox agree! Americans who become Buddhist or Hindu are often fervent spiritual seekers used to struggling with foreign languages and cultures (Sanskrit, Tibetan, Japanese) and pushing themselves outside their “comfort zones”. Converts to the Eastern Orthodox Church can relate! Some Buddhist and Hindu sects even have complex forms of “liturgy” including chant, prostration and veneration of icons! Tibetan Buddhism, especially, places high value on the lives of (their) ascetics, relics and “saints”.

The main difference in spiritual experience is that what the eastern non-Christian traditions recognize as “spiritual illumination” or “primordial awareness” – achieved through deep contemplation (Moksha, Samadhi) – Orthodox Holy Tradition understands merely as “self contemplation”. Archimandrite Sophrony (Sakharov), who was experienced in yoga (‘union’) before becoming a hesychast – monk, and disciple of St. Silouan of the holy mountain, wrote this from personal experience: “All contemplation arrived at by this means (Yoga, etc.) is self-contemplation, not contemplation of God. In these circumstances we open up for ourselves created beauty, not First Being. And in all this there is no salvation for man.” Clement of Alexandria, two thousand years ago, wrote that pre-Christian philosophers were often inspired by God, but he cautioned the Christian must be careful what to take from them!

So we acknowledge that while the eastern seeker may through ascesis or contemplative disciplines experience deep levels of created beauty, or created being, para-normal dimensions, even the ‘non-being’ from which we are formed, these are not the the Uncreated Divine Life!! Are these experiences what the eastern seeker is really struggling for? This is the key question! Only in the Eastern Orthodox Church, through its deifying mysteries will the seeker be brought into the province of Uncreated Divine Life. It is only in the Orthodox Church – of all Christian confessions – that the eastern seeker will find there is more to “salvation” than simply forgiveness of sins and justification before God. He will be led to participate in the Uncreated Energies of God and through them “be partakers of the divine nature.” (II Peter 1:4). As a member of the Body of Christ he will join in the deifying process and be increasingly transformed after the Likeness! Deification is available to all who enter the Holy Orthodox Church, are baptized (which begins the deifying process) and partake of the holy mysteries. It is not just the monks, ascetics and the spiritual athletes!

Eastern Orthodoxy has much to share with eastern spiritual seekers. Life and death hangs in the balance inthis life, not the millions of lives eastern seekers think they have! As the Apostle Paul soberly reminds us, “…it is appointed for men to die once but after this the judgment.” (Heb. 9:27).

May God give us the vision to begin reaching out and sharing the “true light” of the Holy Orthodox faith with seekers of the eastern spiritual traditions.

The Eastern Orthodox Theology of Grace: An Interview with Fr. Michael Shanbour

What does the Orthodox Church teach about divine grace? What makes the theology of grace so important to…