The Catholic Church in Russia predicted a “steady improvement” in ties with the predominant Orthodox Church after a visit by Cardinal Kurt Koch, president of the Pontifical Council fort Promoting Christian Unity. 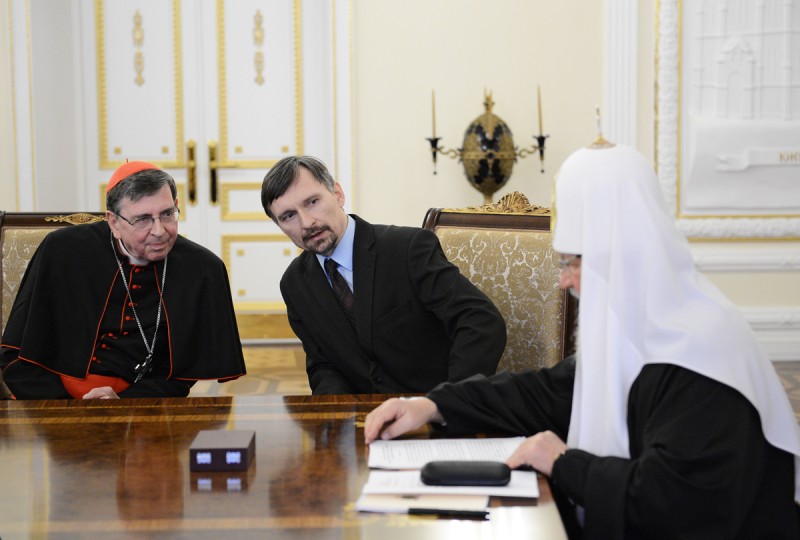 “Catholic-Orthodox relations have improved markedly in recent years and this visit is the latest step toward strengthening and developing them,” said Msgr. Igor Kovalevsky, secretary-general of Russia’s bishops’ conference.

“We now have many common objectives, from preventing persecution of Christians in the Middle East to defending the fundamental values of contemporary civilization, and these were reiterated during Cardinal Koch’s meetings with Orthodox leaders,” he said.

Msgr. Kovalevsky told Catholic News Service Dec. 20 that Catholic activities continued to be impeded in Russia by “huge problems of corruption and bureaucracy.”

However, he said Catholic rights were legally guaranteed and that the church’s relations were “developing well” with the government of Russian President Vladimir Putin.

“Catholicism is a minority faith here, and our communities aren’t numerous. But there’s considerable media interest in our work, and especially in the new pope,” he explained.

Cardinal Koch visited St Petersburg’s Orthodox cathedral and theology academy during his visit, as well as the city’s Catholic seminary and St. Catherine Parish. He later traveled to Moscow, where met with Patriarch Kirill and Metropolitan Hilarion Alfeyev of Volokolamsk,  director of external relations for the Moscow patriarchate. He also met with Alexei Meshkov, Russia’s deputy foreign minister.

Speaking Dec. 19, Patriarch Kirill said Orthodox leaders believed dialogue with Catholics was now “essential.” He said both churches had “much in common on issues of concern to many people.”

“We pin great expectations on the election of Pope Francis because much of what the pope formulates today and suggests for the church and the world and society coincides with our own vision,” said the patriarch, whose speech was reported by the Interfax news agency.

Catholic-Orthodox ties, long tense over complaints of Catholic encroachments in the former Soviet Union, are widely believed to have improved under Pope Benedict XVI and Pope Francis. Relations have been marked by growing contacts and a willingness by both churches to cooperate in safeguarding moral and spiritual values in Europe.

However, he added that the Catholic Church agreed that an eventual meeting between Pope Francis and the Russian patriarch still needed “careful preparation.”

“We can’t expect over-hasty solutions to problems still existing between us. We must be patient,” he said.

Speaking at a Dec. 17 Moscow news conference, Cardinal Koch said Catholic-Orthodox co-operation was required against the “exceptional pressure of secularization.” He said both churches needed to “stay faithful to their roots, while also being up-to-date.”

Interchurch ties still were impeded by “very serious tensions” in neighboring Ukraine over the reclaiming of Soviet-seized places of worship churches by the once-outlawed Greek or Eastern Catholic church, the cardinal said.

He added that relations would improve only when “we clearly recognize the wounds inflicted on both sides.”

“The Greek Catholic was liquidated by the Soviet government, and its faithful forced to become Orthodox. They had a right to re-enter the public sphere when the Soviet regime collapsed,” said Cardinal Koch, whose remarks were reported Dec. 17 by Poland’s Catholic information agency (KAI).

“I’ve visited many Catholic parishes in western Ukraine and seen the suffering of both sides. If the fault for what’s happened rested solely with Greek Catholics, we’d have a greater influence on finding solutions.”