Catholicos-Patriarch Iliya II of All Georgia Arrives in Moscow

January 20, 2012 – His Holiness and Beatitude Iliya II, Catholicos-Patriarch of All Georgia, was given a solemn welcome at Vnukovo airport in Moscow. On his visit to Moscow, the Primate of the Georgian Orthodox Church is accompanied by Metropolitan Theodore of Akhaltsiht and Tao-Klarjeti, vicar of the Catholicos-Patriarch; Metropolitan Gerasim of Zugdidi and Tsaishi, chairman of the Georgian Church’s foreign department; Metropolitan Dimitry of Batumi and Lazeti, Protopresbyter George Zviadadze, rector of Tbilisi Theological Academy, Archimandrite Chinsharauli, and other church officials. 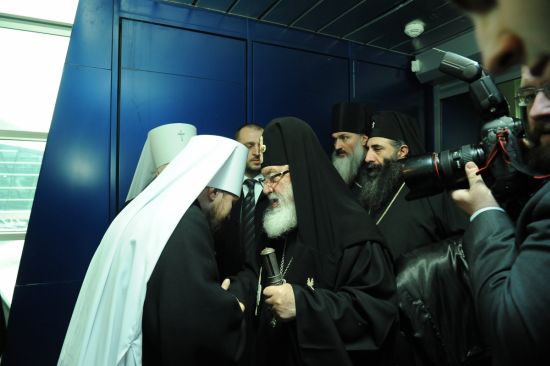 In the evening, Metropolitan Hilarion entertained the Georgian delegation led by Catholicos-Patriarch Iliya II to dinner.