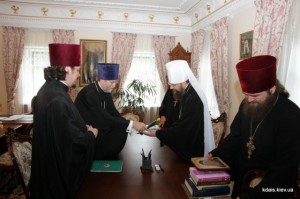 Signing of the Agreement between the Kyiv Theological Academy and St. Vladimir’s Seminary.

His Eminence, Metropolitan Anthony of Boryspil, Rector of the Kyiv Theological Academy and Seminary, and Archpriest Chad Hatfield, Chancellor of Saint Vladimir’s Orthodox Theological Seminary, Yonkers, NY, signed an agreement of cooperation between the two theological schools on June 14, 2013 during the latter’s visit to Ukraine.

The agreement, similar to those concluded with theological schools in Serbia and Romania in February and March 2013 respectively, “provides for the exchange of students and faculty; the sharing of experience in the field of contemporary educational methods; the development and implementation of joint research projects; the sponsoring of research symposia, conferences and seminars; and the exchange of publications and educational and scientific resources of mutual interest,” as reported on the web sites of the Ukrainian Orthodox Church and the Kyiv Academy.

[Reports on earlier agreements may be accessed here and here.]

Among others from the Kyiv Academy administration present for the signing were Archpriests Serhei Yushik and Rostislav Snihiryov.

Also in attendance were His Eminence, Archbishop Alexander of Pereiaslav-Khmelnytskyi and the Secretary of the Archdiocese of Canada of the Orthodox Church in America, Protodeacon Nazari Polataiko.
Tweet
Donate
Share
Since you are here…