When Christ first rose from the tomb and appeared to His disciples and the myrrh-bearing women, He greeted them with the word "Rejoice!". And then later when He appeared to the Apostles His first words were "Peace be unto you!"; peace, because their confusion was very great - the Lord had died. It seemed as though all hope had perished for the victory of God over human wickedness, for the victory of good over evil. It would seem that life itself had been slain and light had faded.
| 22 April 2006 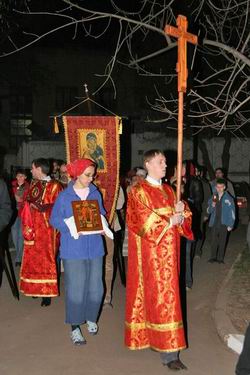 When Christ first rose from the tomb and appeared to His disciples and the myrrh-bearing women, He greeted them with the word “Rejoice!”. And then  later  when  He  appeared  to  the Apostles His first words were “Peace  be unto you!”; peace, because their confusion was very great – the  Lord  had died. It seemed as though all hope had perished for the victory  of  God  over  human wickedness, for the victory of good over evil.  It  would  seem  that  life itself had been slain and light had
faded.

All that remained for the disciples who had believed in Christ, in  life,  in  love,  was  to go on existing, for they could no longer live.  Having  tasted  eternal  life they were now condemned to expect cruel  persecution  and death at the hands of Christ’s enemies. “Peace be unto you”, proclaimed Christ. “I have arisen, I am alive, I am with you,  and  henceforth  nothing  – neither death nor persecution – will ever  separate us or deprive you of eternal life, the victory of God”.

And  then,  having convinced them of His physical resurrection, having restored  their  peace  and  an  unshakable certainty of faith, Christ uttered  words  which  may  in  the  present  age  sound  menacing and frightening  to  many,  “As the Father sent Me, so I send you”. Only a few  hours  after  Christ’s  death  on  the  cross, not long after the fearful  night  in  Gethsemane,  the betrayal by Judas when Christ had been taken by His enemies, condemned to death, led out beyond the city walls  and died on the cross, these words sounded menacing. And it was only  faith,  the conquering certainty  that Christ had risen, that God had  conquered,  that  the  Church had become an invincible force that transformed these words into words of hope and triumphant God-speed.

And  the disciples went out to preach; nothing    could stop them. Twelve men  confronted  the  Roman empire. Twelve defenceless men, twelve men without  legal  rights  were  out to preach the simplest message, that divine  love  had entered the world and that they were willing to give their  lives  for  the  sake  of this love, in order that others might believe  and  come to life, and that a new life might begin for others through their death. [I Cor. IV :9-13]

Death  was  indeed  granted them; there is not a single apostle except St.  John  the  Divine  who  did  not  die a martyr’s death. Death was granted  them,  and persecution and suffering and a cross (II Cor. VI:13-14).

This preaching changed the attitude of man to man; every person became precious  in the eyes of another. The destiny of the world was widened and deepened; it burst the bounds of earth and united earth to heaven. And  now  we  Christians,  in  the words of a western preacher, in the person  of  Jesus  Christ,  have  become  the  people  to whom God has committed  the  care  of  other  people;  that  they should believe in themselves  because  God believes in us; that they hould hope for all things  because  God  puts His hope in us; that they should be able to carry  our  victorious  faith  through  the furnace of horror, trials, hatred  and  persecution  – that faith which has already conquered the world, in the faith in Christ, God crucified and risen.

So let us also stand up for this faith. Let us proclaim it fearlessly, let  us  teach it to our children, let us bring them to the sacraments of  the  Church  which, even before they can understand it, unite them with God and plant eternal life in them.

All  of us, sooner or later, will stand before the judgment of God and will  have  to  answer  whether we were able to love the whole world -believers   and   unbelievers,  the  good  and  the  bad  –  with  the sacrificial,  crucified,  all-conquering love with which God loves us. May the Lord give us invincible courage, triumphant faith, joyful love in  order  that  the  kingdom  for  which  God  became  man  should be established,  that we should truly become godly, that our earth should indeed  become  heaven  where  love, triumphant love lives and reigns.

The Turkish government is rapidly converting the Chora Church into a mosque, shortly after the conversion into a mosque of…

Beauty and Iconoclasm – Where We…

The Turkish government is rapidly converting the Chora Church into a mosque,…

Most viewed articles
Why Do We Need Morning and Evening Prayers?205
Turks Erased Frescoes in Chora Church120
Don’t Turn Back110
Report Details the Horrific Experiences of Christians in North Korea101
Bishop Varlaam of Ploieşti Stresses that Christianity is the Most Persecuted Religion in the World93
Thessaloniki Celebrates Patron Saint Demetrios on His Feast Day92
What Is the Difference Between Fear of God and Panic?70
“We Are Not the Heroes Here, Doctors Are”. Residents of Siberia Drive Doctors to Their Patients36
Beauty and Iconoclasm – Where We Find God19
Condolences of Patriarch Kirill over the Death of People as a Result of Terrorist Action in Nice7
Most popular authors
Pravmir.com team320
Priest Andrei Chizhenko275
Protopresbyter Themistoklis Mourtzanos110
Aurelian Iftimiu93
Irina Sycheva34
Archpriest Stephen Freeman20