The Feast of the Resurrection of Christ is the beginning of newness, of a life that no longer fears death, a life that is stronger than death, a life which can face death in the way in which Saint Paul spoke of it when he said that for him to die is not do divest himselfof temporary life, but to clothe himself with eternity!
| 01 May 2005 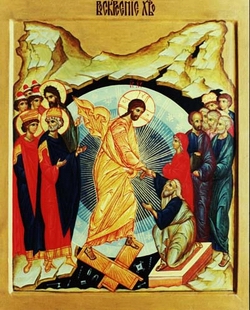 The Feast of the Resurrection of Christ is the beginning of newness, of a life that no longer fears death, a life that is stronger than death, a life which can face death in the way in which Saint Paul spoke of it when he said that for him to die is not do divest himself of temporary life, but to clothe himself with eternity!

The measure of the love of God for us is all the life, all the teaching but also all the death of Christ Who died for us; and the measure He gives for perfect love is that no-one can have a greater love than he or she who
is prepared to give his life for his neighbour. And this neighbour may be a friend, but it also may be a foe! Saint Paul insisted on it when he says that Christ gave His life not only for those who received Him, accepted Him as their Lord, followed Him whithersoever He chose to go,
but also for those who remained His enemies; and for them He prayed,and He commands us by His example and His word to pray the same prayer for those who hate us, who persecute us: Forgive them, Father, they don’t know what they are doing…

But in the Incarnation we have a new vision of man: man is vast enough, deep enough to unite himself to God – the fullness of God abided is the flesh, and we are called to be a revelation not only in words, but in our life, in our persons of this miracle of the
greatness of man! But to be great is costly, and at times frightening: we must put our trust in God, and accept to be so great as one day to become, according to the daring words of Saint Peter, partakers of Divine Nature. And we must believe in man as no unbeliever can believe
in man, believe in the greatness of man, in the vastness, in the holiness, the prospective holiness of man! And together with all believers and unbelievers, the persecutors and the friends, build such a city of man that it should be as great, as vast, as holy as the City
of God of whom the first Citizen could be the Lord Jesus Christ! Isn’t that a vocation great enough, holy enough, isn’t it worth living and dying for this – to make of our earth the Kingdom of God? Let us therefore, in the certainty that Christ has overcome all evil, has
overcome mortality and death, has overcome all the powers of destruction – let us build this city at the cost of our lives, but also in the glory of God!