Christ Prays For Our Perfect Joy

These words spoke Jesus, and lifted up His eyes to heaven, and said, Father, the hour is come, glorify Thy Son, that Thy Son also may glorify Thee: as Thou hast given Him power over all flesh, that He should give eternal life to as many as Thou hast given Him. And this is life eternal, that they might know Thee the only true God, and Jesus Christ, Whom Thou hast sent. I have glorified Thee on earth: I have finished the work which Thou gavest Me to do. And now, O Father, glorify Thou Me with Thy own self with the glory which I had with Thee before the world was.

While I was with them in the world, I kept them in Thy name: those that Thou gavest me I have kept, and none of them is lost, but the son of perdition: that the scripture might be fulfilled. And now come I to Thee, and these things I speak in the world, that they might have My joy fulfilled in themselves (John 17:1-13).

Today, when the Church of Christ prayerfully remembers the Holy Fathers of the First Ecumenical Council – who, inspired by the Holy Spirit, were able to formulate, explain, and transmit to us the truth about God inscribed in the definitions of the Symbol of Faith – a passage from the Holy Gospel of the Apostle John the Evangelist, frequently called the High Priestly Prayer of Christ, is read at the divine service. 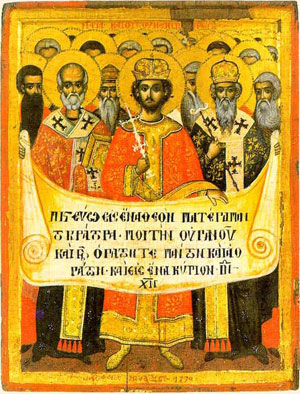 This is something with which we are familiar. When a mother is dying, when the father of small and uncomprehending children stands at the threshold of death, their hearts are filled with horror at the fate of those they are leaving behind, their little ones who are soon to become orphans. This does not happen very often on this earth. Fathers and mothers usually depart from this world after their children have grown up and are standing on their own feet, no longer in need of their aging parents. Yet how the maternal heart overflows with grief when it sees that nothing can help her beloved child besides prayer! Some might say that this is due to lack of faith. Why should mothers fear for their children when God is with them? But let us listen once again to the loving, anxious words spoken by Christ as He prayed for His disciples and, thus, for us: I pray for them, I pray not for the world: but for them which Thou hast given Me… And now I am no more in the world, but these are in the world… Holy Father, keep through Thy own name those whom Thou hast given Me.

He Who offers this prayer – so full of compassion and sympathy, anxiety and hope – is He Who said to His disciples: I am the light of the world (John 8:12). Of course, the Lord is not praying only for the eleven Apostles. He is God; time does not exist for Him. For Him there is neither “yesterday” nor “tomorrow”; for Him there is only one time: “now.” Therefore our Lord, in His High Priestly Prayer, is praying both for the Apostles and for the bishops and presbyters of the Church of Christ who three centuries later would gather at Nicaea to speak, sing, and proclaim our Symbol of Faith – the Symbol of our faith. He prays for them, that this Symbol might be accepted and proclaimed by the Church: For I have given unto them the words which Thou gavest Me, and they have received them, and have known surely that I came out from Thee.

God is for us! God is with us! God did not turn away from us when we betrayed the Crucified One, when by our sins we dragged Him again and again onto the Cross. He continues to call us with Him to eternal life: to the joy that only He can give; to the happiness that is only possible with Him. We often make Him out to be a stern judge about to pronounce a fair but terrible sentence over us. But in His prayer to God the Father, the Lord intercedes for us. He does not simply ask for our preservation; He asks neither for rest, nor for truth, nor for justice for the human race; but rather – only listen to this! – He says to His Father and ours: And now come I to Thee, and these things I speak in the world, that they might have My joy fulfilled in themselves.

If only we would not forget this. If only we would, if only once, hear our Savior’s words about perfect joy not just with our ears – which are no longer capable of being surprised by words or astonished by speeches – but with our whole hearts and with all the depths of our souls. Perhaps then joy and truth might return to our lives, as warmth returns to earth wearied from cold. Amen. 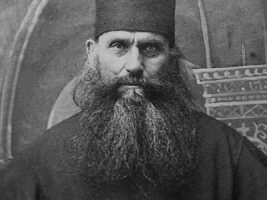