Christian Leader: ‘We Want to Defend the State’ 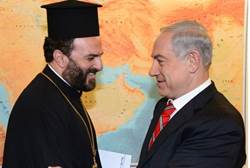 In the face of severe opposition – some would say persecution – by the leaders of his church, Father Gabriel Nadaf, a Greek Orthodox priest from Nazareth and spiritual leader of a forum for the enlistment of Christian youth in the IDF, continues to advocate for a strong connection among Arab Christians with the State of Israel.

On Monday, Nadaf met with Prime Minister Binyamin Netanyahu to discuss issues affecting his community, and ways the state could help him encourage greater participation of Christian Arab youth in Israeli society.

Netanyahu instructed that a joint government-community forum be established to promote the enlistment of Christian community youth into the IDF and national service, and to encourage their integration into the life of the state. The forum will work to include members of the Christian community in dealing with the administrative and legal aspects of enlistment to the IDF, to protect those who support enlistment – as well as enlistees themselves – from violence and threats, and to step up law enforcement efforts against those who disturb the peace and incite to violence.

Nadaf is unique among Orthodox Christian leaders in that he advocates a strong connection between his community and the state – and for that he has been sanctioned by the official Greek Orthodox church, which has sought to have him defrocked. Arab MKs have also condemned him, calling him “an agent of Zionism who seeks to divide Arabs.” Nadaf has also been threatened with violence, and even death, he told Israeli reporters.

But he insists that he represents a sizable portion of the Christian Israeli community.

“We feel secure in the state of Israel,” Nadaf told the Yisrael Hayom daily newspaper in June, “and we see ourselves as citizens of the state with all the attendant rights as well as obligations.”

There has been a significant increase in the number of Christian enlistees in the IDF recently – much of it due to Nadaf’s advocacy – with recruitment jumping from just 35 a year ago to approximately 100 this year. An additional 500 young people from the community are doing national service.

Israel is the only country in the Middle East where the Christian population is actually growing, as incitement, terrorism and mass-killings by Islamists is driving out Christians from countries such as Egypt, Syria, Iraq and Iran. Some analysts see the growth in Israeli Christian enlistment as an acknowledgement of the fact that – with radical Islam on the rise – the State of Israel may be the last safe-haven they have.

At the meeting, Netanyahu said that “members of the Christian community must be allowed to enlist in the IDF. You are loyal citizens who want to defend the state and I salute you and support you. We will not tolerate threats against you and we will act to enforce the law with a heavy hand against those who persecute you. I will not tolerate attempts to crumble the state from within. The State of Israel and the Prime Minister stand alongside you.”

In response, Nadaf said that “our goal is to guard the Holy Land and the State of Israel. We have broken the barrier of fear – the state deserves that we do our part in defending it. Those who oppose the integration of the Christian community in the institutions of state do not walk in the path of Christianity.”

December 31, 2012 Pay your bills as the Kotel and Knesset do, a spokesperson for the Jerusalem Municipality…