Christian Mom Tells How ISIS Gunmen Killed Her Husband, Son And Then Ticked Their Names Off Their Hit-List 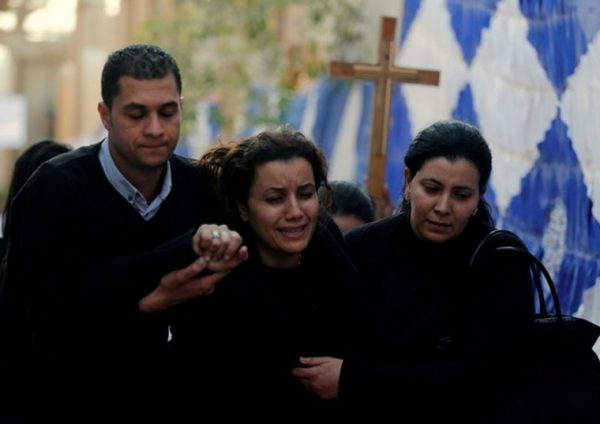 Egyptian Christians react during the funeral of victims killed in the bombing at Cairo's Coptic cathedral, at the Mokattam Cemetery in Cairo, Egypt, on Dec. 12, 2016 / Reuters

Showing no emotion, the gunmen killed her husband and son and then calmly checked their names from a hit-list in one of the gunmen’s pocket: Two more Christians dead, more to go.

Nabila Fawzi Hanna, a 65-year-old Coptic Christian mother in Egypt, told World Watch Monitor (WWM) the gruesome details of how her husband, Saad, and her son, Medhat, were shot dead by two Islamic State (ISIS) gunmen who barged into their home in El-Arish city in Sinai, Egypt on the night of Feb. 21.

She said they were about to sleep when they heard a loud knock on the door. When her son opened the door, the two masked men forced their way in and immediately shot her son on the forehead.

The gunmen then entered the bedroom and found her husband who pleaded for his life. “I’m a sick old man,” he told the gunmen. They responded with two gunshots fired on his head, killing him instantly as well.

The men then asked Nabila if she is a Christian and how is she related to the two men they just killed.

She said, yes, she is a Christian and the two men they just killed were his son and husband.

They asked her for their names and she identified them. One of the gunmen then looked at a paper on his pocket with a list of names and then ticked off two names with a pen.

The murderers then pulled out her gold wedding band from her finger, looted the house, and then set it on fire before fleeing in their car.

Nabila said they were the only Christian family in the neighbourhood, and nobody helped them.

The next day, the ISIS assassins visited the home of Nabila’s daughter and son-in-law’s home. Fortunately, the Christian couple were able to escape just an hour before the gunmen arrived.

In an earlier report, the head of the Coptic Church in the U.K. condemned the “horrific attacks” that have claimed the lives of 40 Christians in the last three months.

In a statement released last week, Bishop Angaelos, General Bishop of the Coptic Orthodox Church in the United Kingdom, noted that ‘incitement by terrorist groups that calls for the killing of Christians in Egypt has spiralled over the past weeks to the extent that lists of churches and individuals have now been released as desirable targets.”

The attacks on Christians escalated following the release of an ISIS video which called on jihadists to target the “infidel” Christian community.