JERUSALEM, November 3 (RIA Novosti) – The Church of the Holy Sepulchre in Jerusalem has threatened to close its doors to pilgrims and tourists as its bank account has been frozen over an accumulated debt for water supplies. 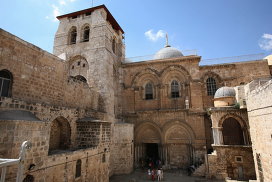 The church, which has been for centuries one of the most important pilgrimage destinations for millions of Christians as the purported site of the crucifixion and resurrection of Jesus Christ, is now unable to pay salaries to its expansive staff of priests, monks and teachers.

“If nothing changes we intend to announce within a few days, for the first time in centuries, that the Church of the Holy Sepulchre is closed,” Greek Orthodox Patriarch of Jerusalem Theophilos III said on Friday.

The church was exempt from water charges in a tacit agreement with Jerusalem authorities for decades but the Hagihon company, which took over water supply to Jerusalem in the late 1990s, has recently demanded payment of a $2.3 mln bill dating back 15 years, including interest.

The company insists that the Israeli laws do not exempt any party from water charges and other religious institutions in Jerusalem pay their bills on a regular basis.

The church says it is willing to pay for future utilities but has asked Hagihon to write off the accumulated debt as it was the result of an original misunderstanding.

Theophilos III wrote letters to the leaders of Israel, Russia, the United States, Greece, Cyprus and Jordan with an appeal to intervene with the standoff and put a stop “to this flagrant act against the church.”

The site, located within the Christian Quarter of the walled Old City of Jerusalem, attracts more than 1 million pilgrims annually.